Sophie Nélisse has been dating Clovis Henrard since February 2020. However, there is no further information about their love life.

Previously, Sophie has been in a relationship with Maxime Gibeault for 2years  (2017-2019). 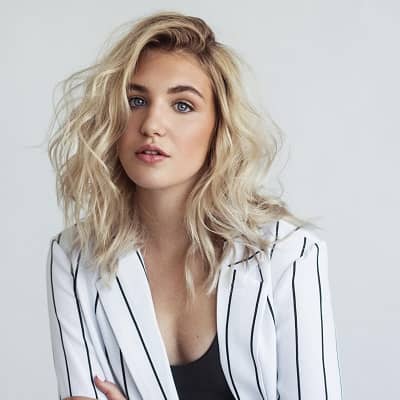 Who is Sophie Nélisse?

Sophie Nélisse is a Canadian actress who has appeared in a number of films.

She is famous for her Genie Award-winning performance in Monsieur Lazhar, her role as Liesel Meminger in Markus Zusak’s best-selling novel The Book Thief, and Caroline in The Kid Detective.

Pauline Belhumeur, Sophie’s mother, left her teaching position in 2013 to act as a talent manager for Sophie and her younger sister, actress Isabelle Nélisse. Her sister Isabelle Nélisse is also an actress, well known for her parts in Mama and HBO’s controversial film The Tale; the sisters also appeared in Mirador, Wait Till Helen Comes, and Worst-Case, We Get Married together.

When she was four years old, her parents moved to Montreal, Quebec. Talking about her education, she completed High School in 2017, June. She said she would not enroll in post-secondary education due to commitments Close in London and Morocco.

Nélisse spoke about entering adulthood in the era of the Weinstein effect in a L’actualité series about “Being 18 in 2018,” and criticized the fact that when she expressed interest in “more mature roles,” she was quickly offered multiple roles in which her characters would be raped, and that the scenarios she receives almost always include sexual elements.

Nelisse began her career in commercials at the age of seven and made her cinematic debut at the age of ten in the 2012 French-Canadian feature Monsieur Lazhar.

Sophie then went on to star in Luc Picard’s 2012 film Esimésac before being called to test for the lead role of a German girl in The Book Thief, an English-language feature film.

She had a recurrent part in the Québec sitcom Les Parent, and she also starred in the 2015 film The Great Gilly Hopkins as the titular character.

Nélisse made her red carpet debut at the Cannes Film Festival in May 2016, presenting the Canadian thriller Mean Dreams.

Furthermore, Sophie was announced as the face of Caroline Néron’s Fall 2018 jewelry line in June 2018.

She was cast opposite Geoffrey Rush and Emily Watson in the film. Sophie starred in the sequel thriller 47 Meters Down Uncaged in 2019.

Sophie has an estimated net worth of around 1.5million. Moreover, her exact salary and income aren’t disclosed yet.

The details of her salary, luxuries, brands, and lifestyle are currently under review.

Throughout her successful career, she never became a part of any controversial issue.

Sophie stands tall at a height of 5 feet and 5inches and weighs around 50 kgs. Similarly, her waist and hip size are 24-33inches. Her dress size is 4 (US).

She has an attractive personality with beautiful Blue eyes and Dyed Blonde-colored hair.

Sophie is actively active on social media sites. She has a verified Instagram account under the username @sophie__nelisse with over 282k followers and has more than 22.3k followers on Twitter.

She is also active on Facebook and has over 5k followers. Furthermore, she has a Tiktok account under the username @sophienlisse with 18.9k followers.