Talking about her love life, Sophie Rundle is presently engaged to Matt Stokoe. Matt is a well-named English actor known for his role as Alex in the Channel 4 series Misfits, Bodyguard, The Village. They got engaged in May 2019.

The couple met for the first time on the set of the TV series Jameston. Additionally, they have worked together in several BBC TV series. The couple announced Rundle’s pregnancy on 16 February 2021.

Likewise, they welcomed their first child as a son on 11 April 2021. Sophie has shared her moments with the baby on her Instagram.

Moreover, Rundle is also available on Facebook with nearly 10.4k fans and supporters. 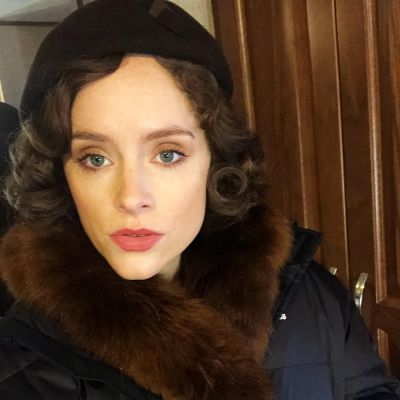 If we don't start representing women properly on screen now, we're never going to change our opinion of them as a society.

You just hope each job is going to be as good as it possibly can be.

All Anne Lister wanted was a wife, and the other liaisons couldn't commit, but Ann Walker did. She took sacrament with her, and they became wife and wife. That shows extraordinary strength.

Who is Sophie Rundle?

Moreover, she is also known for her act in the ITV drama series, The Bletchley Circle, and Labia in the British/American sitcom Episodes.

Sophie Rundle was born on 21 April 1988. At present, her age is 33 years old. Likewise, her birthplace is High Wycombe, Buckinghamshire, United Kingdom.

Sophie is the daughter of her father, Michael Rundle whereas her mother is Fiona Rundle. Moreover, she has two brothers named James and Henry Rundle.

Talking about her nationality, Rundle holds a British identity whereas her ethnicity is Caucasian.

Regarding education, the actress attended the Bournemouth School for Girls. Later, in 2011, she earned her graduate degree from the Royal Academy of Dramatic Art with a Bachelor of Arts Degree in Acting.

After some time, she was featured in the ITV four-part television miniseries period drama, Titanic, made by producer Nigel Stafford-Clark.

Rundle then featured as a guest star as Labia in the British/American television sitcom Episodes opposite Matt LeBlanc and Stephen Mangan that premiered on Showtime and BBC Two.

The actress also performed in Great Expectations directed by Mile Newell. The film was released in the UK on 30 November 2012.

In June 2015, the actress performed the role of Jenny in the Channel 4 sitcom Not Safe for Work alongside Zawe Aston, Tom Weston-Jones, and so on.

Recently, she featured in the role of Princess Diana in an episode of the Sky Arts’ Urban Myths series in 2019. Sophie also portrayed the role in BBC One program, The Nest alongside Martin Compston in 2020. She featured in Netflix’s The Midnight Sky, playing Jean Sullivan.

A talented British actress, Rundle has earned a handsome amount of money from her profession. She has been active in her profession from the year 2007 till the present.

It is reported that Sophie Rundle has an estimated net worth of $3 million as of 2022.

Sophie has never been part of any controversial matter or rumors till now. The actress has been preoccupied with her professional and private life.

It seems that Rundle prefers enjoying her personal life and does not want to merge it with her professional life.

33 years old star, Sophie has gorgeous looks and an admirable personality. She stands at a height of 5 feet 5 inches. Also, she has a balanced body weight of 54 kg.

Furthermore, Rundle has blue eyes whereas her hair is brown. Her body measurement is 34-25-35 inches(chest-waist-hip) respectively.

Regarding her social media presence, Sophie Rundle is an active personality on social media. Sophie has more than 464k followers on her official Instagram account @sophiesophierundle.