Posted by MarriedBiography Posted on June 4, 2021 | In Sexuality
Share this 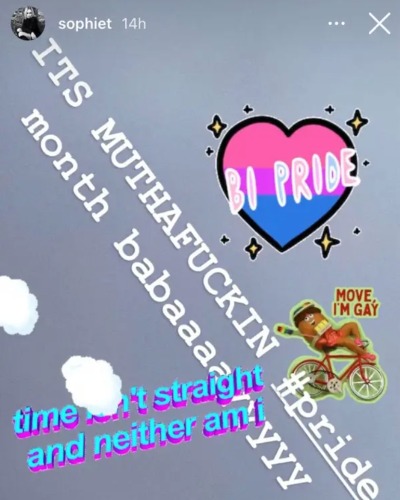 Sophie Turner celebrated pride month with a hint of her not being straight. She posted on her Instagram story where she kept elements which read as ‘BI PRIDE’, “MOVE, I’M Gay’, and ‘GAY PRIDE’. Likewise, she wrote,

“time isn’t straight and neither am i”

Her Instagram story hinted that she is ready to come out. Her story has made many of her fans curious as she has not labeled herself or given any other statement. On Twitter, one of her fans wrote,

“sophie turner reminding everyone she’s bi via about twenty insta story gifs, we love to see it”,

Fans are confused with it and are asking questions if she is bi or not. The only person who could answer the curiosity is Sophie herself. At present, she is happily married to Joe Jonas and the couple celebrated their third wedding anniversary recently. Furthermore, Sophie has a daughter Willa Jonas born on 22nd July 2020 with her husband Joe.

Even if she is coming out as bisexual or gay, Joe might be very supportive of her sexuality. He has been an amazing husband to the beauty. He might continue to be there for her in her new journey.

Sophie Turner is an English actress who is immensely famous for her work as an actress in the all-time hit HBO Television series Game of Thrones whereby, she portrayed the main role as Sansa Stark.

She is also known for playing in the Television series The Thirteen Tale in the role of Young Adeline March. Read more bio…

Lio Tipton comes out as non-binary! What is Lio’s pronoun?
Tags : Actress Game of Thrones