Posted by MarriedBiography Posted on May 14, 2020 | In Pregnant , Relationship , Wedding
Share this 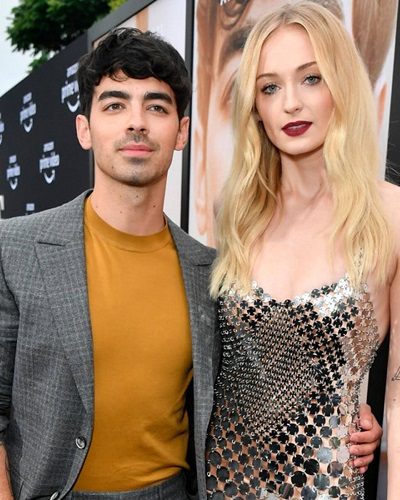 Pregnant Sophie Turner has given a glimpse of her growing belly bump. Recently, Sophie with her husband Joe Jonas was photographed on a quarantine walk, clad in face masks and dressed-down black outfits, in their first joint sighting in months.

Likewise, she wore her hair in a chic half-ponytail with matching black sunglasses. Joe was wearing a black jacket and light-wash denim and opted for a pop of color with a vibrant red T-shirt.

Also, they have been keeping a low profile in recent months as the pregnancy rumors swirled. Similarly, her growing baby bump was clearly visible in her clothes.

Also read Are pregnant women and their unborn babies at increased risk if the women develop coronavirus infection?

Sophie Turner is expecting her first child with husband Joe Jonas. Her pregnancy speculation began in February. The couple has not confirmed their baby news yet. Likewise, as per the source,

“Having children and starting a family was part of Joe and Sophie’s plan,”

“So it’s our Vegas anniversary, and we used to be the couple that every few days we would celebrate, right. So it’d be like we’ve been dating for a week, we’d have a party or we’d have a big dinner.”

The Game of Thrones actress stripped completely naked as she filmed a harrowing shower scene for her new thriller series, Survive. She was seen sitting in the shower as she appears transfixed on a razor while showering.

Likewise, she sat naked in the shower block before being discharged from a mental health rehabilitation center. In the series, she plays the role of Jane who once discharged from the facility gets on a plane that crashes into snow-topped mountains and is one of only two survivors.

Similarly, the series focuses on the physical and mental battle Sophie’s character and the other survivor face in the aftermath of the catastrophe.

Sophie Turner is an English actress who is immensely famous for her work as an actress in the all-time hit HBO Television series ‘Game of Thornes’ whereby, she portrayed the main role as Sansa Stark. She is also known for playing in a Television series ‘The Thirteen Tale’ as the role of ‘Young Adeline March’. Read more bio…

Joe Jonas is an American singer who exhibits a perfect sample of a beautiful voice and earned enough name and fame as a member of boy band ‘Jonas Brothers’ in which his own siblings Nick Jonas and Kevin Jonas were the other two members. Read more bio…