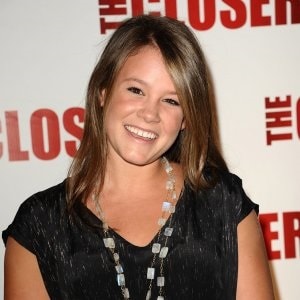 “I can see that. He's got existential crisis written all over his forehead.”

Sosie Bacon is living her single life. She has not been married yet. She does not like to talk about her personal topics. She might be focusing on her career.

You may like: Kyra Sedgwick and her husband Kevin Bacon celebrated their 29th wedding anniversary! Shares about the secret of their marriage

Who is Sosie Bacon?

Sosie Bacon is an American actress and she is known for her role in ‘Loverboy’, and in ‘Off Season’. She is the winner of Miss Golden Globe 2014.

She was born on March 15, 1992, in Los Angeles, California. Her birth name is Sosie Ruth Bacon and she is currently 26 years old. Her father’s name is Kevin Bacon and her mother’s name is Kyra Sedgwick. Her parents belong to the film industry. She was given a birth name by her mother after filming ‘Miss Rose White’ and named Bacon after the movie’s art director, Sosie Hublitz. She was isolated from her parent’s career during her childhood.

Her parents did not approve of her coming to an acting field. Her mother would spend half of the year in L.A and Bacon would stay with her father and brother (Travis Bacon) in Manhattan. She holds American citizenship and her ethnicity is a mix of English and Scottish.

Also read: Meet Travis Bacon, son of Kevin Bacon and Kyra Sedgwick! All about his past and what he is doing at present!!

She studied at Brown University and later studied at the musical theatre company CAP21.

Her father praised her work on ‘Loverboy’ but he did not encourage her to pursue an acting career further. Her mother found Bacon’s role hard and the producer offered bacon a more regular role on ‘Major Crimes’, a Spin-off of the ‘The Closer’ series. Later, she joined the cast of ‘Fiction in Photographs’ in 2012, an Off-Broadway musical by Dan Mills and Randy Redd.

She played the leading female role of the 2014 independent film ‘Off Season’ opposite Chance Kelly. Her other work includes ‘13 Reasons Why’ and ‘Here and Now’, where she played as Kristen.

It is estimated that she has a net worth of $250,000 and her main source of income is from form her professional career.

There is a rumor that she has been dating a guy, Troy who has a name ‘dobbyisland’on his Instagram. But, she has not confirmed yet.

She has a height of 5 ft. 4 inches and she weighs 75 kg. She has got dark brown hair and light brown eyes.