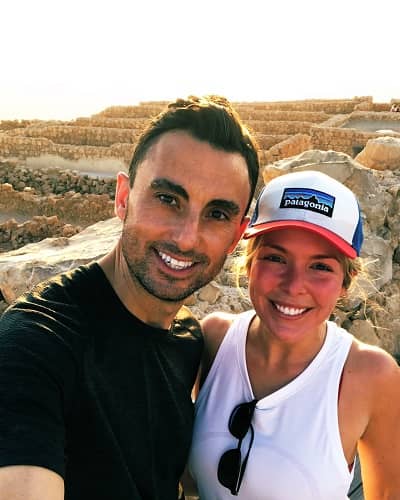 John Gonzalez is a sportswriter and known for covering the NBA. He is the host of The Ringer NBA Show: Heat Check podcast. John is also a columnist for the Philadelphia Inquirer and a TV host and analyst for NBCSportsPhilly.

He is the host of the show The 700 Level on Comcast SportsNet. He left the Inquirer sports station to move to the West Coast. CSN Philly said that he was a valued member of their team. CSN Philly wished him all the best for his future.

In 2020, John joined the Sixers Talk podcast to discuss Allen Iverson‘s place on actually hitting on Matisse Thybulle. He also had a conversation with Paul Hudrick about the craziest NBA offseason ever and a moment to appreciate Brett Brown.

Also read Ari Shaffir, an American comedian, writer, and producer who has an immense career as a comedian with Personal life remaining confidential!

John Gonzalez is the husband of Colleen Wolfe. They got engaged in the year 2010 and walked down the aisle on 4th September 2011. John is an on-air talent for the NFL Network.

She has hosted many shows like Good Morning Football and NFL GameDay Kickoff. Similarly, she is a frequent guest of the Around the NFL Podcast produced by NFL.com.

Colleen used to be a sports anchor for Fox29 but she moved to Los Angeles in 2014 to work for the NFL Network. Since the time she landed her on-air job on NFL, they were living on different coasts and John had to fly back and forth multiple times a month.

“It was stupid, but we weren’t sure how long she’d be out there or I’d be here. Now we’re going to stop doing that and be together.”

Mike Missanelli said that Wolfe was not qualified for the job. He said,

“I don’t know why the sporting world needs a female play-by-play person on an NFL game. And I know that sounds harsh, and I just want to know, what is the reason for it? … Here’s my rationale for that. Women don’t grow up playing football.”

The couple John and Colleen do not have kids. But, they have two pets, a dog named Blitzen and a cat, Ernest Hemingway. Colleen shares their picture on Instagram. They rescue animals and bring them home.

How much is the net worth of John Gonzalez?

Also read Pietra Dawn Cherniak married life with Billy Bob Thornton who has been married six times! Know about her children, age, and net worth

Is John Gonzalez on social media?

John Gonzalez is on social media. But his social media presence is limited to Twitter only. On Twitter, he has 52.5k followers. He makes frequent tweets on his account.

He retweets tweets of Ringer Union. On 10th September 2020, he retweeted the Ringer Union’s tweet which was about them sharing the stories of current and former Ringer staffers about the fair wage importance.

“It’s not only difficult to pay for living essentials on an entry-level Ringer salary—it’s also difficult to secure a raise no matter how well the employee or company does.”

On 4th September 2020, he wished his wife their wedding anniversary. He wrote,

“Happy ninth anniversary @ColleenWolfe. I’m so lucky we found each other. You’re the love of my life, my favorite person, my best friend, my…rock. (Col I’m so sorry but you chose this so this is really your fault when you think about it love you)”

Colleen Wolfe is an anchor and television presenter. She covered about National Football League based in Philadelphia.

Previously, she has also worked at CN8 as an anchor and later moved to Comcast SportsNet as a booking producer and on-air personality. Read more bio…