Stacy Lewis is an American golfer. Stacy is married and has a daughter together. 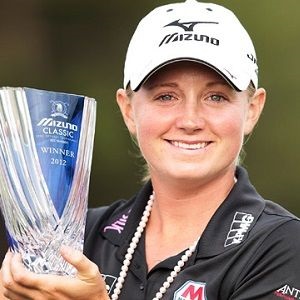 If you're 70th or 80th on the money list, it's not very motivating.

Assuming everything goes OK, we will use that event as a test run, to kind of see how things go.

I would like to play, just to get that travel thing down, and get into a routine with the baby and then kind of figure out things as we go.

Stacy is married to Gerrod Chadwell in August 2016 in Mystic, Conn. Her husband Gerrod is a head coach in Houston Women’s Golf. She married him before Olympics in Rio de Janeiro. Their wedding ceremony was an intimate one where only their family and friends were invited.

Chadwell proposed to her in November 2015 after dating for some time.

In October 2018, the couple became parents of their first child. It is a girl. The news of their daughter Chesnee Lynn Chadwell was shared via her Twitter handle.

Who is Stacy Lewis?

Ohio-born Stacy Lewis was is a professional golfer. She turned professional in 2008. Stacy has listed 14 professional wins. It includes 11 “LPGA Tour” wins, 1 “LGPA of Japan Tour”, and 2 other wins. Additionally, she has participated in “U.S Women’s Open”, “Women’s British Open”, and “Women’s PGA Championship”, and others.

Presently, she ranks 15th in Official Rolex Ranking and 10th in CME ranking.

Stacy was born in Toledo in the state of Ohio on February 16, 1985. She is of American nationality and her ethnicity is Caucasian.

Stacy was passionate about golf from a very young age. Although she was born in Ohio, she grew up in Texas in the Woodlands. She was born to parents, Dale Lewis(father) and Carol Lewis(mother). Stacy played golf throughout her high school and college days. She had a rough childhood as she went through surgery to recover from scoliosis.

As per her education, she attended The Woodlands High School. She graduated from there in 2003. Afterward, for her further studies, she enrolled at the University of Arkansas.

Stacy initiated her golf career from a young age. She grew her passion for golf during her childhood and high school days. As an amateur golfer, she started at the age of 8. She won ‘Southeastern Conference Tournament’ in 2005. Similarly, she also won ‘Women’s Western Amateur’ in 2006. This win boosted her career. Eventually, she won several other local titles and events during her amateur career. Afterward, she thought of turning professional in 2008.

Presently, she earns a massive amount of salary and has an estimated net worth of $10 million.

Stacy focuses on her career. She was part of the controversy when she talked about the pay gap between several tournaments. Presently, there are no other rumors that surround her personal or professional life.