Stacy Osei-Kuffour is married to Sherif Alabede, a television writer and music video director. The couple met in 2011.

The engaged couple chose January 18th as their wedding date because they both have birthdays on the 18th and wanted it to coincide with their favorite number.

They also agreed that they wanted a desert-themed wedding for their winter wedding. They chose Newhall Mansion in California for the celebration because it could accommodate both of their families. They have no children as of now. 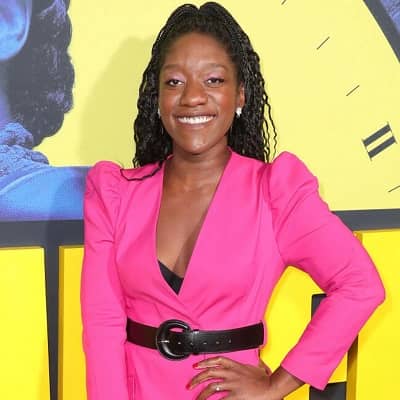 Who is Stacy Osei-Kuffour?

Stacy Osei-Kuffour is a playwright, actress, and writer from the United States best known for her work on Watchmen and PEN15.

In 2019, she was nominated for an Emmy Award for PEN15 and won a Writers Guild Award for her work on Watchmen.

Stacy was born on April 18, 1987. She is 34years old as of 2022. Denise Poindexter and Godwin Osei-Kuffour raised Osei-Kuffour in Chicago, Illinois.

Her mother is a Black American schoolteacher, and her father is a Ghanaian business owner. Her multi-cultural heritage is frequently reflected in her work.

She holds an American nationality.

After graduating from Flossmoor’s Homewood-Flossmoor High School, Osei-Kuffour attended New York University’s Tisch School of the Arts, where she majored in drama at the Stella Adler Studio of Acting.

She met future collaborators Anna Konkle and Maya Erskine at NYU, with whom she later worked on PEN15. In addition, she attended the Royal Academy of Dramatic Art in London.

She earned a Master’s degree in playwriting from Hunter College after graduating from NYU.

After six years of struggling to break into the New York City theater scene, Osei-Kuffour relocated to Los Angeles to pursue acting and writing. She landed a few acting roles, including three appearances on Accountability Partners.

Also, she continued to write plays, and several of them were produced. In the spring of 2018, her play Hang Man premiered in her hometown of Chicago The COVID-19 pandemic prevented her play Animals from premiering at the Williamstown Theater Festival in Massachusetts, but the festival produced it as an audio play in December 2020, starring William Jackson Harper and Aja Naomi King.

In January 2020, Hulu hired her to co-write a television adaptation of Nnedi Okorafor’s science fiction novella Binti with Okorafor.

In February 2021, it was announced that Osei-Kuffour would pen the script for the Blade reboot starring Mahershala Ali, making her the first Black woman to write a Marvel Studios feature film. The production of the film is set to begin in July 2022.

In 2021, she continued her television work by writing for the Amazon anthology series Solos.

The net worth of Stacy Osei-Kuffour is accumulated to be between $1million-$5million USD while her exact income and salary are under review.

Stacy has not indulged herself in any kind of rumors yet. She has kept a clean image and appears to be avoiding rumors and controversies.

Osei-Kuffour has a height of 5feet and 6 inches and weighs around 55kgs. Stacy has a dark skin complexion with Black curly hair and black eyes.