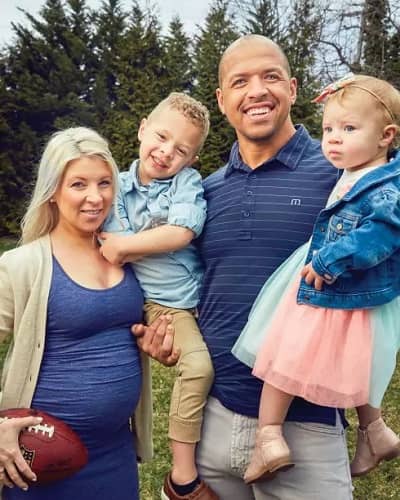 Stacy Sydlo is a Physician Liaison Officer and the wife of Miles Austin. After college, she started her career as a pharmaceutical representative with Novartis.

After that, she worked as a refractive surgery coordinator with Corneal Associates. At present, she works as a physician liaison officer at Mountainside Hospital in Montclair, New Jersey.

What is the age of Stacy Sydlo?

Stacy Sydlo was born on 24th July 1982 in Horseheads, New York. She is 38 years old at present. Stacy is the daughter of Rick Sydlo and Rosary Sydlo. She went to Monmouth University, New Jersey, and studied communications, public relations, and journalism. Likewise, Sydlo was a bright student who perfectly balanced her academics and sports.

When she was in Horseheads High School, she earned a three-sport athlete award, four letters in lacrosse, and was named MVP of the team. While she was a freshman at Monmouth, she played in all 20 games for the Hawks and scored 33 points. She was ranked third on the team.

Also read All about Jennifer Aydin and her mother’s family drama! Know about her age, family, married life with Bill Ayden, and children

Stacy Sydlo and Miles Austin met each other in the year 2000 at Monmouth University. They met on his first visit to the school. Also, the college sweethearts of almost two decades walked down the aisle on 1st March 2014.

His Dallas Cowboys teammates Jason Witten, Tony Romo, and DeMarco Murray served as groomsmen during the ceremony. However, Miles is known to date multiple women including the businesswoman Kim Kardashian.

Together the couple has three children, Maven, Ava, and Miles IV. Since their married life they have been living together happily in the New Jersey home.

Stacy Sydlo has an estimated net worth of $500 thousand. Talking about her husband’s net worth, Miles Austin has a net worth of $4 million. They live in Rumson, New Jersey, USA house. He purchased the uptown crib for $500k.

Miles has played as a wide receiver and played in the NFL for 10 seasons mostly with Dallas Cowboys. In the year 2017, he was hired by the Dallas Cowboys as a pro and college scouting intern.

Also read Who is Alexandre de Meyer? Know about his married life with Danielle Colby, net worth, facts on Danielle, biography

Miles Austin is an American football coach and former player. Currently, he serves as offensive quality control for the San Francisco 49ers. He played 10 seasons in the NFL with the Dallas Cowboys, Cleveland Browns, and Philadelphia Eagles. Read more bio…