Actress Stana Katic is married to a businessman. 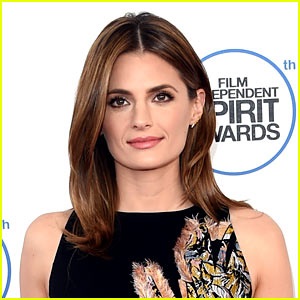 I was named for my grandmother. It's an evil-eye name, to protect you from bad things

When I was 16, I was in Boston and some friends said, 'You want to go to New York?,' I went with my roommate... These guys said, 'We're going to this club. Just don't go in the washroom.' It was CBGB. I had no idea what it was or the history of all the music. All I knew was this was my first 21-and-over club and I managed to get in

Men should never marry their muse. It ruins the illusion.

Beautiful and charming Katic is married to her longtime boyfriend Kris Brkljac who is a business efficiency consultant by profession. They got married at the private ceremony held on Dalmatian Coast in Croatia on 25th April 2015 just one day before her 37th birthday. The couple finally got into married life after dating for many years and getting to know each other at its best.

Who is Stana Katic?

Stana Katic is a Canadian-American actress best known for her role as Detective Kate Beckett on a crime drama television series ‘Castle’ in 2009. She is ranked number 1 on the list of “TV’s 100 sexiest women” by Buddy. TV in 2009.

Born on 1978-04-26 as Stana Jacqueline Katic in Ontario, Canada. Her nationality is Canadian-American and her ethnicity is Croatian Serb.

She was born to a Croatian Serb family father Peter Katic and mother Rada Katic. She is named after her grandmother which means to be protected from bad things.

She holds dual citizenship in the United States and Canada. Stana is the oldest of all her four brothers and one sister.

Her family moved to Illinois where she graduated from West Aurora High School in 1996. After graduation, she went on to study International law and economics at the University of Toronto and also got enrolled in an acting course from DePaul University Goodman School of Drama from 2000 to 2002.

She can easily speak in accents of numerous countries like British, Irish, Italian, Spanish, Greek, Eastern European, and South African.

Stana Katic had to struggle a lot after finishing her academic course she moved to Los Angeles and started living in a hostel for a few months and in her car just to save money.

Later on, she got a job in a department store as a furniture seller and was able to afford an apartment. Somehow after that, she got a chance to meet up with her manager and started making her move towards the television and movies.

Her acting career has begun with the starting role of Annie in big-screen flicks ‘Acid Flicks’ in 1999. Since then she has been working on and on in movies and television series till today’s date gaining name and fame living a luxurious lifestyle in Los Angeles.

Her career started to blossom when she was landed the lead detective role in the crime television series ‘Castle’. Katic has established her own production company Sine Timore Production in 2008 as well as a non-profit Alternative Travel Project in 2010. Currently, it’s found that she is filming the movie ‘Cadaver’.

Katic has been nominated for many awards and has successfully won awards like TV Guide Magazine’s Fan Favorites Awards, PRISM Award, and People’s Choice Award.

Katic is rumored to be in an affair with her co-star Nathan Fillion from the crime television series ‘castle’.