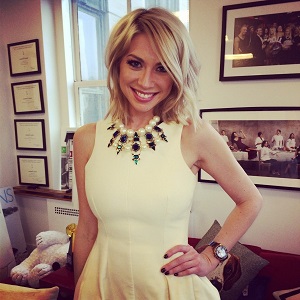 Literally want to take every fork and knife and just graze over his body until he slowly bleeds to death.

My mom always told me that I’m the descendant of a Swedish princess, so I try to act like one.

Sorry I’m trustworthy and it’s easy to be in love with me.

Stassi Schroeder is not married as of now. But she has been in multiple relationships. Currently, she is dating Beau Clark. He works as a commercial casting.

In the past, Stassi has dated TV personality, Jax Taylor from 2011. The lovebirds were happily living sharing an incredible bond. But unfortunately, things started falling apart and they separated in 2013.

After that, she was in a relationship with Patrick Meagher. They have been through several break-ups and patch-ups. As of now, there is no statement from any of them about their current status of the relationship.

Who is Stassi Schroeder?

New Orleans-born Stassi Schroeder is multi-talented Stassi is a TV personality and a podcast host. She is also famous as a fashion blogger and a model.

Additionally, she is popular for appearing on the TV show, “The Amazing Race” in 2005. Presently, she is a prominent figure in the media for appearing in the reality television series “Vanderpump Rules”. The show is a spin-off of the series, “The Real Housewives of Beverly Hills”.

Stassi was born in the city of New Orleans in the state of Louisiana on June 24, 1988. She possesses American nationality and ethnicity is German.

Her birth name is Nastassia Bianca Schroeder. Her father, Mark Schroeder is an architect and her mother, Dayna Schroeder is a jewelry designer. She started getting fascinated by theater from a very young age.

At the age of 11, she enrolled in theater classes during her high school days. In her late teenage period, she moved to Hollywood.

As per her education, she joined some high school. Afterward, she attended Loyola Marymount University. Later, she graduated from there with a Bachelor’s degree in English Writing.

Stassi initiated her TV career as a contestant on a TV show. she made her debut from the show, “The Amazing Race”. She appeared on the 8th season of the reality-based game show with her family. Afterward, in 2008, she starred in a reality series, “Queen Bees”. She kept on working hard to get a better opportunity in her career.

Consequently, Stassi Schroeder has joined the cast of “Vanderpump Rules”. The show is a spin-off of the series, “The Real Housewives of Beverly Hills”. Presently, she has already appeared in 5 seasons of the show.

As per her modeling career, she did modeling for lots of campaigns, and magazines. Some of them are Italian Vanity Fair, 944, and Us Weekly. Additionally, she is also a fashion blogger and fashion columnist. She writes about fashion, lifestyle and pop culture on her website, “juststassi.com”. Furthermore, she is also a podcast host and her work can be seen on her website.

Presently, she earns a large amount of salary and has an estimated net worth of $3,00,000.

Stassi was criticized by her fans regarding her comments on race. Eventually, it made a huge controversy in the media. But later on, she apologized for it. Presently, there are no other rumors that surround her personal or professional life.

Stassi Schroeder has a height of 5 feet 7 inches. Her body weighs 64kg. Her body measures the size of 38-26-37 inches. Besides these, her bra size is 34D, shoe size is 9.5US and dress size is 10US. Further, she has blonde hair and blue eyes.

Reality TV stars Stassi Schroeder and Beau Clark get engaged…. in a cemetery!