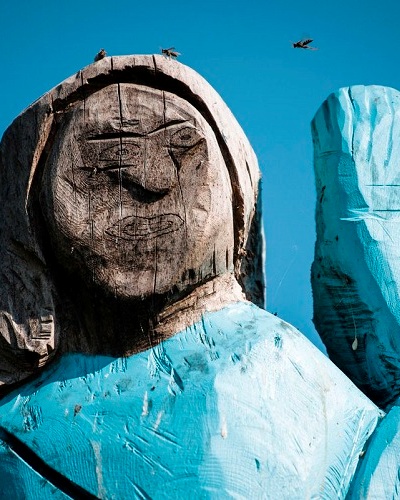 Melania Trump and the burning of her statue

The First Lady of the USA, Melania Trump hails from Slovenia. There was a life-sized statue of hers near her hometown in Slovenia.

But some miscreants burned it down in anger, Reuters news agency has reported. The police are already in and are thoroughly investigating the incident.

Brad Downey, the Berlin-based American artist had made the sculpture. And he told Reuters that he came to know about the crime one day after the incident happened.

As a result of the burning, the statue of Melania which was made of wood blackened and was disfigured. Bard was confused and wanted some answers.

More on the burning of Melania’s statue

Brad stated that he has made a police complaint of the incident. Further, he revealed that he had made the sculpture in order to spark some healthy conversation on the political issues in the USA mainly related to immigration.

Brad is working on a film right now. Therefore, he wants to know who the miscreant his. He also wants to interview the person and find out why he burned the statue.

“An investigation into the matter is ongoing, so we cannot reveal details to the interest of further procedures.”

This statue was unveiled only one year back. In the installed sculpture, Melania was shown wearing the blue-colored dress that she wore on the Inauguration Day of Donald Trump. Wearing the light blue coat, she was waving her one hand to the onlookers.

People’s views on the sculpture

The statue was carved out of a living linden tree trunk using a chainsaw. When it was placed at the place, there was a mixed reaction from the locals around.

One resident had remarked:

“Melania in the sculpture does not look as beautiful as she normally is.”

While another local had told BBC News that it looked like Smurfette. Besides the statue of Melania, those of her husband Donald Trump also had faced the wrath of the people of that country.

In January 2020. Associated Press had reported that a 26-foot statue of  the USA President was completely in a burned stage in Slovenia one day. In this sculpture, he was wearing a blue suit, white-colored shirt, and a red tie.

Additionally, he had his right fist up in the air. This wood work also had an inbuilt mechanism which it one operates could open his mouth to reveal his shark-like teeth. It was mocking the President but even this was found in a burned state.