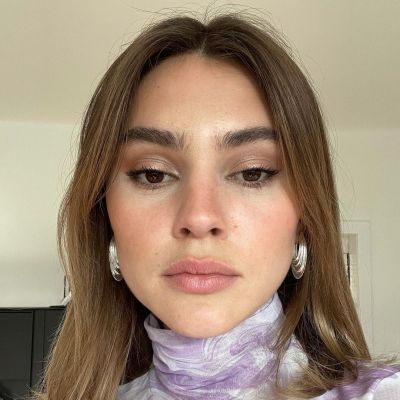 Stefanie Giesinger is currently dating a Youtuber, Marcus Butler. The couple has been in a romantic relationship since 2016.

Who is Stefanie Giesinger?

Stefanie Giesinger is a German model and actress. She was crowned the ninth season of the modeling competition, Germany’s Next Topmodel. In June 2014, she was on the cover of the German Cosmopolitan.

Stefanie was born in Kaiserslautern, Germany, on the 27th of August 1996. According to her birth date, she is 25 years old as of 2021. Her Sun sign is Virgo.

She is the only daughter of Michael Giesinger (father) and Helena Giesinger (mother). Further, she has a brother named Daniel Giesinger. A year before her birth, her parents emigrated from Siberia to Germany in 1995.

Her academic details are under the curtains at the moment. Talking about nationality, she holds German citizenship and her ethnicity is Caucasian.

Stefanie came into the spotlight of the media after winning Germany’s Next Topmodel in 2014. She then signed to Günther Klum’s modeling agency ‘ONEeins’ for two years contract. Similarly, she posed as a cover girl in the June 2014 edition of German Cosmopolitan magazine.

Furthermore, she has appeared in Max Giesinger’s music video, “80 Millionen”. She also starred in the films such as Asphaltgorillas (2018), Wuff (2018), and Asphalt Gorillas.

She was honored by Herman fashion online retailer About You as “Idol of the Year” at the About You Awards.

Stefanie stays miles away from any sorts of rumors and controversy that creates a huge buzz in the media. To date, she has managed to maintain a  clean profile.

Stefanie amassed a decent amount of fortune from her modeling career. As of 2021, she has an estimated net worth in the range of $1 million to $5 million.

The model has an impressive height of 5 feet 10 inches tall. Her weight is about 60 kg. Likewise, her waist and hips sizes are 24 and 34 inches.

She has a brown pair of eyes and her hair color is light brown.

The model has verified social media sites. She has more than 4.1m followers on Instagram, 1m followers on Facebook. Stefanie is also active on Tiktok where she has over 237.5k followers.

Moreover, she has a self-titted YouTube channel with nearly 204k subscribers. However, she doesn’t available on Twitter.