Stefano Gabbana is gay. He and Dolce were an open couple for many years. Domenico Dolce is the co-founder of Dolce & Gabbana. However, they ended their long-time relationship in the year 2005 which was started in 1982. But they still work together at D&G.

As of now, he is single and not dating anyone. 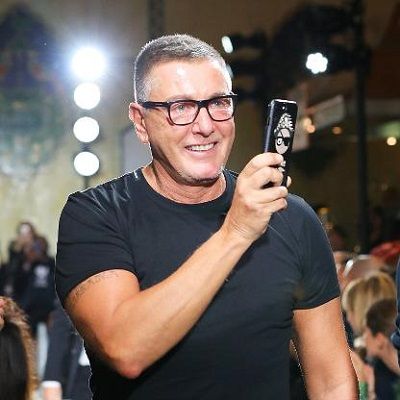 You have to work very hard behind the scenes, to make a message clear enough for a lot of people to understand.

I don't have the time to be bored.

you need a great deal of energy and determination, and a little bit of luck.

Who is Stefano Gabbana?

Similarly, they presented their first women’s collection in 1985 in Milan, where a year later their store would open its doors.

Besides, he belongs to Italian nationality and his ethnicity is mixed (Sicilian and Italian).

Talking about his education, he graduated from the Istituto Superiore per le Industrie Artistiche, a design institute in Rome.

In the year 1980, he met Sicilian Domenico Dolce through Dolce’s employer, designer Giorgio Correggiari. Similarly, in the year 1983, he and Dolce left Correggiari to work on their own and two years later, they launched Dolce & Gabbana S.p.A. (D&G).

Likewise, in October 1985, their brand made its fashion show debut at Milano Collezioni’s Nuovi Talenti. After that, in March 1986, D&G released its first collection and held its own show Real Women. In the year 1987, the first D&G store opened in Milan, at 7 Via Santa Cecilia.

Similarly, in 1988, D&G established a partnership with Dolce’s father Saverio who owned the manufacturing company Dolce Saverio in Legnano, near Milan. In the year 1993, the Italian designers received worldwide fame when Madonna chose D&G to design the costumes for her Girlie Show World Tour.

Likewise, they have since gone on to design for Monica Bellucci, Kylie Minogue, Angelina Jolie, and Isabella Rossellini. Moreover, by 2003, the company sold more products in Italy than Armani, Gucci, Prada, and Versace. furthermore, in 2009, nearly 25 years after D&G opened, the company had 113 stores and 21 factory outlets, a staff of 3,500 people and an annual turnover of more than €1 billion.

He received numerous honors for their fashion and cultural contributions. Similarly, their first fashion award was the International Woolmark Prize came in the year 1991. In the year 1993, their Dolce & Gabbana Parfum was named the Best Fragrance of the Year.

Likewise, in 2009, the City of Milan awarded them the Ambrogino Gold medal.

The estimated net worth of Stefano is around $1.4 billion as of 2022. In March 2015, he was the 28th richest person in Italy with the net worth of $1.56 billion. He has earned a huge amount of money from his successful career. But he has not revealed his salary and other incomes.

In the year 2013, he and Domenico Dolce were convicted of tax evasion and sentenced to a 20-month suspended sentence in prison.

Talking about Stefano Gabbana’s body measurements, he has a height of 5 feet 9 inches and weighs around 75 kg. He has salt and pepper hair and blue eyes.