Steffi Graf is a German former professional tennis player. She is married and has two kids.

Steffi Graf is a married woman. She was in a relationship with German tennis player Alexander Mronz, while they were both emerging in the game.

Graf had a brief affair with the English pop singer, Mick Hucknall in 1991. She managed to hold the famous womanizer in a relationship for a little over a year before he decided to explore pastures anew.

Steffi started dating German racer Michael Bartels in 1992. After being in a steady relationship for about 7 years, they decided to part ways in 1999. Sources close to the German racer blamed Andre Agassi for their breakup. Soon after, her relationship with Bartels ended, Steffi found solace with American retired tennis player Andre Agassi.

The rumors of their relationship started swirling around in September 1999 after they were spotted getting cozy in a New York restaurant and a bunch of days later, shopping together in Los Angeles.

In October 2001, they got married in a small and intimate wedding ceremony with their mothers serving as the only witnesses. She gave birth to a son, Jaden Gil in 2001 and a daughter, Jaz Elle in 2003. 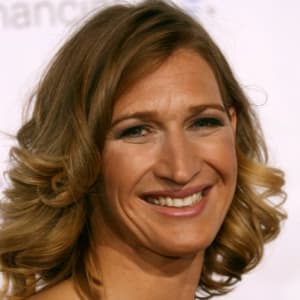 Sometimes I wish I could have been a bit more relaxed. But then I wouldn't have been the same player.

Who is Steffi Graf?

In the year 1988, she became the only tennis player to achieve the Golden Slam by winning all four Grand Slam singles titles and the Olympic gold medal in the same calendar year.

Furthermore, she is also the only tennis player to have won each Grand Slam tournament at least four times.

Steffi Graf was born in Mannheim, West Germany on  June 14, 1969. Her birth name is Stefanie Maria Graf and she is currently 51 years old. Her father’s name is Peter Graf and her mother’s name is Heidi Graf.

Graf’s tryst with tennis started when she was merely three years old. Her father, who was an aspiring tennis coach, taught toddler Graf how to swing a wooden racket.

A year later, she hit the court and began practicing officially. This was the modest beginning of what became an internationally successful career.

She has a brother namely, Michael Graf. Steffi holds German citizenship and German ethnicity. Her birth sign is  Gemini.

Talking about Steffi’s education history, there is no information about her educational achievements.

Talking about her profession, Steffi Graf’s first outing professionally was for the 1982 Porsche Grand Prix at Filderstadt, Germany. She was only 13 at that time. Though she lost the game to opponent Tracy Austin by 6–4, 6–0, this did very little to dishearten the young blood.

It was at the 1984 fourth-round Centre Court match at Wimbledon that Graf came to the limelight when she almost upset the tenth seed, Jo Durie of the United Kingdom. She went on to win the tennis demonstration event at the 1984 Olympic Games in Los Angeles.

In the following years, Graf emerged as the top challenger at the US Open. Though she lost both to Martina Navratilova and Chris Evert, she was consistent enough to reach the finals and the semi-finals. 1986 was a seminal day for Graf as she won her first WTA tournament by beating Chris Evert in the finals of the Family Circle Cup in Hilton Head, South Carolina. She followed up the same by winning at Amelia Island, Charleston, and Berlin.

Later in the French Open finals, Graf defeated Navratilova, who was the World No. 1, after beating Gabriela Sabatini in a three-set semi-final. In the year 1988, she struck gold by not only winning all the four Grand Slam titles but the Olympic Gold Medal as well. With this, she became the first and the only player to achieve this feat.

While Graf gained an easy victory over Chris Evert in the finals of the Australian Open, at the French Open, she defeated Natasha Zvereva thus successfully defending her title. At Wimbledon, Graf was playing against Navratilova when she won the match, thus ending the latter’s winning streak. In the US Open, Graf played against Sabatini defeating her and winning the Calendar Year Grand Slam.

In the year 1990, brought mixed results for Graf. While she won the Australian Open defeating Mary Joe Fernandez, she failed to make it to the finals of Wimbledon and US Open. As for French Open, she lost the finals to Monica Seles. Despite the defeat, Graf retained the position as a top-ranked player.

In the year 1992, she was the revival year for Graf. At the Olympics, Graf secured the silver medal. As for Virginia Slims Championships, she lost the tournament thrice in a row. For the first time since long, Graf was free from any kind of injury in 1994. She began the year on a winning note, gaining triumph over the Australian Open where she defeated Arantxa Sanchez Vicario.

The next couple of games brought sad results as Graf was struggling with her form. She lost against Mary Pierce in a French Open semi-final, to Lori McNeil at the first round in Wimbledon. The Virginia Slims Championships also brought depressing results as Graf went on to lose the same as well. She took a breath of relief by defeating World No. 2 Hingis and World No. 1 Lindsay Davenport en route to the Philadelphia title in 1998.

Later, she went on to defeat World No. 3 Jana Novotna at the first round of the season-ending Chase Championships. In the year 1999, she was a mixed bag. While she won quite a few warm-up games, she lost the quarter-finals of the Australian Open to Monica Seles. As for French Open, she reached the finals, her first time in the last three years, and went on to win the same defeating Hingis.

Graf reached the finals of Wimbledon later losing it to Davenport. With this, she announced her retirement from the women’s tour. She was ranked as the World No. 3 positions at that time.

Post-retirement, Graf played a few games and competed in some matches. In the year 2009, she played a singles exhibition match against Kim Clijsters and a mixed doubles exhibition alongside her husband Andre Agassi against Tim Henman and Clijsters. She played celebrity doubles, women’s doubles, and mixed doubles before her strained calf muscle caused her exit.

Similarly, in 1988 she was the most significant year as she became the first and only tennis player to achieve the Calendar Year Golden Slam by winning all four Grand Slam singles titles and the Olympic gold medal in the same calendar year.

Additionally, the same year she won the ‘Female Sports Award of the Last Decade’ by ESPY, Las Vegas, and Olympic Medal of Honor’. In 2007, she won the ‘German Media Prize’ for authentic social commitment.

She has an estimated net worth of around $30 million (as per 2020 data) and she has earned that sum of money from her professional career.

She has been ranked as No. 1 for 377 weeks, hence she was given the prize money of $21 million in prize money.

There was a rumor that Graf’s lawyer said Tuesday that one of the tennis star’s key sponsors acted on which deciding to cancel a lucrative sponsorship deal. Currently, she is far from rumors and controversies.

Also, read the affair, salary, net worth, controversy, and the bio of Rod Laver, Rafael Nadal, and Roger Federer.