Stella, as of now is in a relationship. She is dating Alec Holden. He is a YouTuber. The couple looks very cute and loves each other very much. They keep updating their relationship status on social media.

But she has been in multiple relationships in the past. In the year 2008, she was in a relationship with Dylan Efron. He is the brother of actor Zac Efron who was her sister’s then-boyfriend. They were pretty happy but things didn’t work out between them. They broke up after a year of togetherness.

From July 2011, she started dating actor/singer Jaden Smith. The lovebirds stayed together for a year but eventually separated in August 2012. In 2014, she dated Alec Holden. Their happy moments could be easily seen in social media posts. After a couple of years of enjoying each other’s company, they separated in 2016. Their separation was confirmed by both through twitter posts. 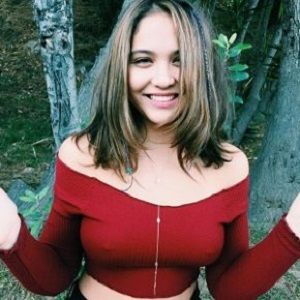 I like to look at my personal style as an extension of my mood that day.

Who is Stella Hudgens?

Stella Hudgens is the younger sister of multi-talented actress/singer Vanessa Hudgens. Stella is best known for her role as Amanda in an American independent DV drama film, “The Memory Thief” which was released in 2007.

Furthermore, she has appeared in films like “16 and Missing”, “Single with Parents”, and “Deeply Irresponsible”.

Stella Hudgens was born in California on November 13, 1995. The young and talented actress is of mixed (Irish, Filipino, Chinese, and Spanish) ethnicity and her nationality is American.

Her birth name is Stella Teodora Chanel Guangco Hudgens. She was born to the father, Greg Hudgens, and the mother, Gina Hudgens.

There is not any information regarding her early days and her childhood. She grew up watching her sister on the screen.

Her education or academic achievement, it is not known to the public yet.

Stella Hudgens initiated her acting career at a very young age. When she was 7 years old, she debuted onscreen in the TV show “American Family” in 2002. This boosted her career and she went on to do many TV shows and short films. She worked hard for every role.

Consequently, she got her major role in the 2007 American independent DV drama film, “The Memory Thief”. This fueled up her experience section on her resume. She became a popular face among the viewers. Presently, she is a prominent public figure because of her films like “The Memory Thief”, “16 and Missing”, “Single with Parents”, and “Deeply Irresponsible”.

Stella Hudgens: Salary and Net Worth

There is no information about her salary but she earns a  net worth of $1.5 million as of 2022.

Stella Hudgens was part of a controversy that was fueled by her Instagram post. Following the carving of her initials on rock, she was subject to public controversy. Additionally, she paid the fine of $1000 for the recovery of damage.