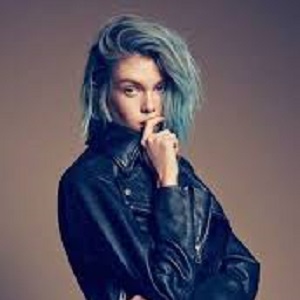 I admire women in a different way. And she asked me what that meant. And I said, ‘I love them. I love them like I love boys.’ And it was so hard for her to understand.

Stella Maxwell has had two relationships in this industry, while the first one was with Miley Cyrus and another one is Twilight actress named Kristen Stewart.

Firstly, Stella has been a relationship with Miley Cyrus in 2015. Miley denied the relationship stating she was pan-sexual and changing her style regularly.

She is likely to be a lesbian and the Twilight actress locked lips as they enjoyed a romantic getaway in Milan.

Both were dressed down for the journey into Milan Airport, with Kristen, 26, dressed down in ripped jeans, a bomber jacket, woolen socks, and plimsolls.

The pair were first caught together leaving a Met Gala after-party earlier this year and since then on numerous occasions in both Los Angels and New York. But they ended their affair in 2019.

Stella was also seen with Jordan Barett in 2019. At present, she is possibly single.

Who is Stella Maxwell?

Stella Maxwell is a Belgium-born model who grew up in New Zealand. She was one of the new faces in the Victoria’s Fashion Show 2014.

She has been grown as popular celebrities in Modelling Fraternity.

She was born on May 15, 1990, in Brussels, Belgium. Her nationality is (British, Irish, and New Zealander) and ethnicity is Northern Irish.

Stella was born to the Northern Irish parents named Maurice Maxwell(father) and Stella Maynes(mother). She grew up with siblings named Patrick, Martin, and Helen.

She lived there until she was 13 before moving down under to Canberra. A year later her family settled in Wellington, New Zealand.

She has attended Otago University. She started her modeling career following her graduation.

During her career, Stella Maxwell went to the European school which is located in Woluwe for her early education. She walked the Victoria’s Secret Fashion Show 2014 where she was credited. After that, In 2015, She became a Victoria’s Secret Angel.

Till now she has advertised and endorsed huge brands, some of which are River Island, Puma, Asos, Alexander McQueen, and Jacobs. She has also advertised for Victoria’s Secret and Jeremy Scott.

Maxwell has done a lot of editorials as well as for fashion magazines such as Bullet, Dress to kill, and Madame Figaro.

There are many rumors associating her with pop star Miley Cyrus. In the time, when she was kissed by Miley a lot of buzz in the fraternity as well as a lot of controversies created in the news.

Her shoe is 5 (US) and her dress size is 2 (US) respectively. She has a blonde hair color with attractive blue eyes.

Kristen Stewart: her gay-lesbian nature, her new girlfriend Stella Maxwell and her views on sexuality: Know on it here!