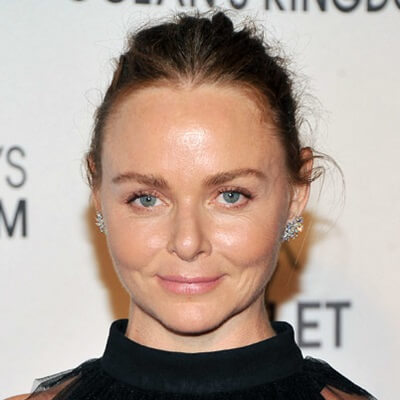 What is the relationship of Stella McCartney?

Stella McCartney is a married woman. She is married to Alasdhair Willis. He is a British publisher who works as creative director of the shoewear brand, Hunter. In 2015, he was named one of GQ’s best-dressed British men.

The couple exchanged wedding vows on 30 August 2003 at Mount Stuart House on the Isle of Bute. She wore a wedding dress similar to her mom’s dress from 1969.

Who is Stella McCartney?

Stella Mccartney is an English fashion designer who runs a brand under her own name operating 17 freestanding stores in America and Europe. Stella Mccartney earned fame since her childhood days as the daughter of Sir Paul McCartney and his late wife, Linda McCartney.

Stella McCartney was born on 13 September 1971, at King’s College Hospital in London, England. As of 2021, her age is 50. She was born to parents Linda McCartney and Sir Paul McCartney. Her father, Paul McCartney is arguably the greatest singer-songwriter of all time and rose to fame as the co-vocalist and bassist of the hugely popular British rock band, The Beatles. Her mother was a photographer.

She has an older half-sister named Heather (adopted by her father), an older sister named Mary, and a younger brother named James.

Her ethnicity is English, Ashkenazi Jewish.

Talking about her education, she went to local state schools in East Sussex and attended Bexhill College. She has admitted to being bullied and being a bully herself during her school days.

Stella McCartney started her career in fashion in 1995 with her first collection and asked Naomi Campbell and Kate Moss to model her collection. After some years, she became the head designer at the fashion house ‘Chloe’ in Paris, France.

She started gaining more success commercially and in 2001, she launched her own fashion house and founded one and displayed her first collection in Paris, France. Now, she is the owner of 17 stores located in Soho, London, West Hollywood, Paris, Barcelona, and Milan

Moreover, she also launched her first perfume, ‘Stella’ and in 2004, she and Adidas launched a joint-venture line of sports performance collections for women. In the same year, she designed clothes for Madonna, Annie Lennox, Jude Law, Gwyneth Paltrow, etc.

In 2005, she launched a range of clothing and accessories for ‘H&M’. A couple of years later, she entered cosmetics by launching a skincare line, ‘CARE’.

In September 2010, Stella became Team Great Britain’s Creative Director for the 2012 Olympics by Adidas which was the first time ever in history that a leading fashion designer designed the apparel for a country’s team for both the Olympics and the Paralympic Games. She continued this role for the 2016 Summer Olympics.

In April 2018, after 17 years of partnership with Kering, she purchased its stake and took the reins of her global fashion empire. She famously designed Meghan Markle’s royal wedding reception dress and created 46 replicas for her Made With Love collection, each sold at £3,500.

Stella McCartney has an estimated net worth of around $75 million as of 2022. Her father, Paul McCartney is the first billionaire rockstar with a net worth of $1.2 billion.

In 2019, Stella McCartney was criticized by social media users, after sharing an ‘insensitive’ post about Meghan Markle on Remembrance Day. She took to Instagram to share a photograph of the Duchess of Sussex at the Remembrance Sunday service in which she was wearing a matching navy woolen coat and hat.

Under the image, she wrote, “So honored to have  HRH Duchess of Sussex in our Autumn ’19 coat at Remembrance Day service. x Stella #RemembranceDay.”

People found the post ‘disrespectful’ and took to the comments section to express their opinion. A critic wrote,

“Using remembrance day to advertise your clothes is a little disrespectful!! People died and you take pictures of people showing respect for advertising purposes. Just wrong.”

Stella stands at a height of 5 feet 5 inches and weighs around 55 kg. Her body measurements for breasts, waist, and hips are 34-26-35 inches. She has blonde hair and blue eyes.

You may also like to read the Bio, Career, Net Worth, and more about Sir Paul McCartney, Marc Jacobs, Victoria Beckham, and more.