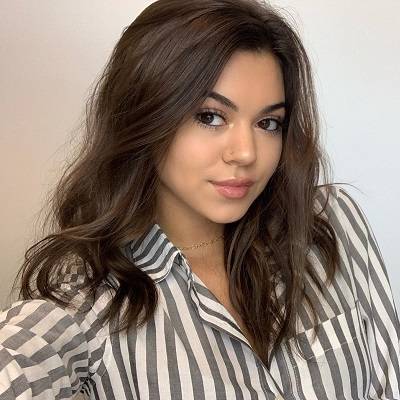 Steph Pappas’s current relationship status is possibly single. Till the date, she has not introduced anybody about her boyfriend or a lover.

As of now, she has filled any information about her previous relationship and dating history. Currently, she is focused on her career as a social media star.

Who is Steph Pappas?

American Steph Pappas is a YouTuber and social media influencer. She is renowned for her mukbangs and challenge videos that went viral on YouTube.

Steph Pappas was born as Stephanie Pappas on the 14th of July 2000 in Akron, Ohio. She is of Greek ancestry.

Till the date, she has not named her mother. However, she often appears with her parents on her YouTube videos. Her father, John Pappas also has a self-titled YouTube channel too.

She has an elder brother, Nick Pappas. Nick is a manager by profession. Talking about her educational background, she is a graduate of Hoover High School with a major in Cinematography and Video production.

In 2015, Steph Pappas started her YouTube journey with another YouTuber, Ashley Rivera with the joined account. They first met each other online back in 2014.

Later, she started uploading videos in their account. Most of the content of the channel was related to gaming. However, their makeup tutorials, Q&A, and vlogs also had a significant place on their YouTube.

Moving forward, they parted away from each other as YouTube partners and started her own self-titled YouTube channel in 2016. As a YouTube personality, she had plenty of audience for her new channel.

At first, most of her contents were related to the makeup videos. However, later her content shifted towards mukbangs videos. Through her video, she presented her passion for food among her audience which earned plenty of audience on her channel.

Some of her most viewed YouTube videos include Burger King Mukbang, Pizza Hut New Big Dipper Pizza Review, and Trying Wendy’s New Breakfast Menu Items, with over 500 thousand views. Currently, her YouTube channel has 1. 18 million views with over 190 million views.

As of now, she is expanding her career towards TikTok too. Currently, on her TikTok account, she has around 251.6k followers and 6.6 million likes.

She first uploaded her video on the 13th of July 2019. She has collaborated with Patrick McNeill and Austin for the TikTok video. Like her YouTube channel, food is one of the key ingredients of her TikTok videos too.

As of 2020, she has an estimated net worth of $500 Thousand. Her YouTube channel has earnings in the range of $3.5k to $216.5k. Apart from that, she also makes through her Instagram posts and brand promotions too.

As of now, she has managed to maintain dignity as a YouTuber. Till the date, she has not been through any sort of controversy that created a buzz in the media.

Similarly, she has stayed far from any type of rumors too.

Steph Pappas has brown eyes with brunette hair. She has a decent height and an average weight. Details about her body stats are not available.