Stephanie Abrams is an American television meteorologist. She has worked for The Weather Channel since 2003. 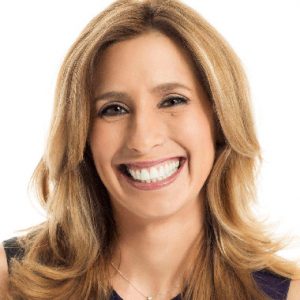 Stephanie Abrams is currently single and doesn’t have a boyfriend. No news about her dating anyone comes out as she keeps her personal life very low profile. She, however, is said to have been married to Mike Bettes, her co-hosts.

After the wedding, Stephanie Abrams and her husband probably started marital issues and they got separated only four months later.

Currently, Stephanie is single and there s no news about her affairs and current boyfriend as well.

Who is Stephanie Abrams?

Stephanie Abrams is an American television meteorologist, currently working for The Weather Channel (TWC). She currently co-hosts AMHQ with Jen Carfagno and Jim Cantore from 6 am to 9 am on weekdays.

She has also done live reporting for the 2010 Winter Olympics in Vancouver, British Columbia, Canada.

Abrams was born on October 27, 1978, in Wellington, Florida, U.S. Details about her father, mother, and ancestry are unknown.

Abrams graduated with a Bachelor of Science (B.S) in geography, minoring in mathematics, from the “University of Florida” in Gainesville, graduating with honors and elected to Phi Beta Kappa.

She was a member of Delta Phi Epsilon Sorority, where she served as President of the chapter.

At Florida State, like other meteorology students practiced on-air forecasts on FSU Live, a student-run news and weather production on a Tallahassee cable channel. She worked as a teaching assistant at FSU, teaching a class about meteorology.

Abram is a member of the National Weather Association (NWA) and the American Meteorological Society (AMS) and was president of the North Florida chapter of the AMS from 2002 to 2003. She holds the seal of approval from the AMS.

Stephanie Abram’s first position was as a morning meteorologist at WTXL, the ABC affiliate in Tallahassee, Florida. In July 2003, Abrams began on-air work for The Weather Channel.

At the Weather Channel, she was a reporter and fill-in from 2003 to 2005. In 2005, she joined her first show, Weekend View, as a co-host. In 2006, she became an on-camera meteorologist as co-host of Abrams and Bettes: Beyond the Forecast and then went on to Weather Center, also with co-host Mike Bettes. On July 20, 2009, she began co-hosting Wake Up With Al with NBC’s Al Roker on Weekdays mornings from 5 am to 7 am.

ET which means ended in the fall of 2015. She occasionally joined Sam Champion on AMHW from 7-10 AM during that period hosting Wake Up With Al.

During the 2010 Winter Olympics in Vancouver, she reported live from Vancouver February 8-28, 2010, with Al Roker for Wake Up With Al and AMHQ. Abrams has filled in for Roker when he was on vacation, live from the network’s Rockefeller Center studios in New York City.

Stephanie Abrams was an interim weather anchor on Weekend Today in 2012 when Bill Karins and Janice Huff left until Dylan Dreyer arrived. Abrams formerly co-hosted The Weather Channel programs On The Rader from 2012-2013 and Morning Rush (formerly Your Weather Today) on Weekdays from 2009-2014.

She co-hosted Wake Up With Al until it ended in the fall of 2015. She is now a co-host of America’s Morning headquarters. Abrams also occasionally filled in for Roker on Today.

In 2014, Abrams co-hosted herself in Sharknado 2: The Second One. Stephanie earns a beautiful salary, upwards of $175,000 and her Net worth is pitted to be at $7 million.

Some rumors about Stephanie Abrams was being pregnant with Mike’s child also came about after their divorce but it was never verified by her or her ex-husband.

Apart from that, there have been no rumors about any of her affairs and she seems to be extremely good about keeping her personal life a secret.

This pretty lady has a perfect height of 5 feet 8 inches and she weighs 61 kg. Her body measurements are 37-27-35 inches and she has an attractive figure.