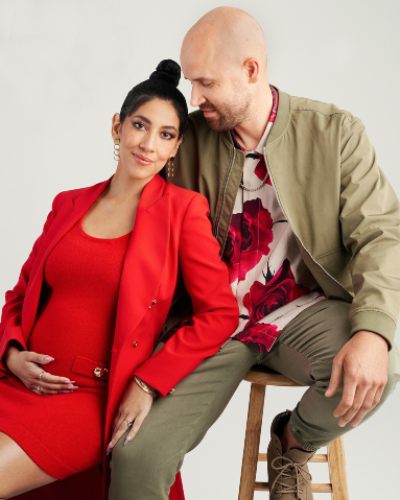 The actress and her husband Hoss are pregnant with their first baby together. She announced the news through her Instagram sharing an adorable picture of her while cradling her baby bump. The actress dressed up in a red dress while her husband lovingly looked at her on the picture. Alongside the picture she wrote a caption saying “Mom and Dad (for real tho),”.

After the picture came online, the good wishes started flooding on the comment section. Everyone congratulted the soon-to-be parents which also included the actresses co-star Leslie Grace and Melissa Barrera. Bridgerton star Nicola Coughlan also commented on the picture saying OMG adding three heart emojii alongside. She also released an official statement to PEOPLE revealing her pregnancy. The excited parents-to-be are all set to welcome their little one soon.

Beatriz’s married life with her husband

Life is not same for the 40-years old actress since last few years, During her college years, she never used to see herself as someone who would settle down and have a family. However, everything changed for her after she met her now husband. The couple tied the knot back n 2018 with their friend and family’s blessings. She further explained:

“I didn’t think that a committed partnership was really for me. I couldn’t really see kids. It wasn’t that I was closed off to it. It was more that I couldn’t quite see how a baby fit into the life that I was building.”

The actress who came out as bisexual also mentioned getting married doesn’t mean she is any less of a queer. She also added she can be most authentic herself when she is around her husband. The actress describes her husband saying ‘extremely empathetic and open’. She and Hoss both prepare to be parents and both are committed to raise a child who believes in equality. The actress further explained:

“I think one of the best things you can do is raise a kid who understands that however a person chooses to shape their one glorious life is worthy of celebration,”