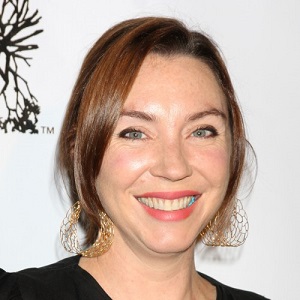 I was never tortured over whether I wanted to become an actor. There was never another option in my mind. I'm sort of East Coast, so I like the off-white and the navy blues and the low-key preppy kind of thing

I was a switchboard operator on the first season of 'Mad Men.' I was the oldest and bitterest.

What is the relationship of Stephanie Courtney?

Stephanie Courtney is a married woman. She has been married to Scott Kolanach since November 25, 2008. Her husband is the lighting director for the Groundlings theatre in LA.

Scott is a very supportive husband and the couple is enjoying their blissful relationship. The duo has not welcomed any child yet and also, there is no sign of divorce between them.

Who is Stephanie Courtney?

Stephanie Courtney is an American actress and comedian. Stephanie is well known for performing the advertising character Flo in television and radio commercials for Progressive Corporation in 2008.

She is well recognized for her voice of Renee the Receptionist and Joy Peters on the comedy series ‘Tom Goes to the Mayor’ from 2004 to 2006.

She was born on February 8, 1970, in Stony Point, New York, USA. Her father is a history teacher and her mother is a singer.

She is the youngest of three children. Her sister’s name is Jennifer Courtney. She is a sister-in-law of guy Stevenson.

She attended Binghamton University and graduated from there in 1992 with a degree in English. She played Elizabeth Proctor in ‘The Crucible’ during her university period.

Stephanie Courtney moved to New York City after graduation and met the author and columnist Meghan Daum and studied acting at the Neighborhood Playhouse while working as evening secretary for Smith Barney chairman Robert S. Greenhill.

After that, she moved to Los Angeles and roomed with her sister, actress Jennifer Courtney. The two sisters wrote and performed the sketch ‘Those Courtney Girls’ in LA and at the Aspen Comedy Festival. She worked in catering to support herself during her early time in Los Angeles.

Stephanie debuted her film career with the film ‘Sweet Bird of You’ in 1998. She portrayed the character, Kate, in the film. In the same year, she appeared as a waitress in the television series ‘Mr. Show with Bob and David’. Also, she gave the voice of Mischa Barton in the video game ‘Celebrity Deathmatch’ in 2003.

She has an estimated net worth of around $6 million as of 2022, and she has earned that sum of money from her career. And, it is heard that she gets an average salary of around 500,000 dollars from her profession.

There was a rumor that she had been killed in an automobile accident but later found that it was a prank promulgated by BuzzFeed, which is a site devoted to spreading false news about celebrities.

Stephanie Courtney has a height of 5 ft. 8 inches and she weighs 60 kg. Also, she has blemish-free skin, piercing hazel eyes, and light red hair.