Stephanie Davis is an English actress. She is in a relationship.

Stephanie Davis was previously in a relationship with singer and former One Direction member, Zayn Malik.

They were together for 5 months. Additionally, Davis also dated model Sam Reece for a brief amount of time.

In 2016, she was in a relationship with Jeremy McConnell.

The pair dated from January until May 2016 and then from February until July 2017.

They have one son together from this relationship, Caben-Albi George Davis.

Presently, she is in a relationship with a guy named Lewy Browne. 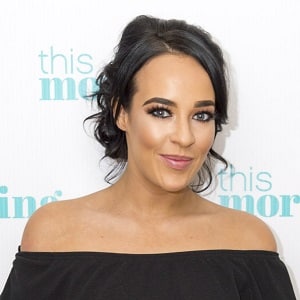 Who is Stephanie Davis?

Stephanie Davis is an English actress.

People mostly recognize her for her appearance in the Channel 4 soap opera ‘Hollyoaks’ and the seventeenth series of ‘Celebrity Big Brother’.

Davis was born in Merseyside on March 8, 1993, to parents Pauline Davis and Roy Davis.

She became interested in the world of acting in her childhood years.

She is of British nationality. Furthermore, there are no details available about her ethnic background at present.

Additionally, she has two younger brothers.

Davis initially began her career as a child actress. She played the role of Gretl von Trapp in the Liverpool Empire Theatre’s production of ‘The Sound of Music’.

Additionally, she also appeared in the title role in the theatre’s production of ‘Annie’.

In 2005, she appeared as Caitlin in the TV movie ‘The Outsiders’.

In addition, she also portrayed the role of Macy Gardiner in the TV series ‘Holby City’ and Lisa Lebbon in ‘Doctors’.

Since then, she has appeared in numerous other television series. All in all, she has over 15 credits as an actress.

Some other television series that Davis has appeared in are ‘Hollyoaks’, ‘Hollyoaks Later’, ‘Parents of the Band’, ‘This Morning’, ‘Loose Women’, ‘Children in Need’, and ‘Over the Rainbow’ among others.

Davis has garnered two British Soap Awards for her performance in ‘Hollyoaks’ in the category of Best Dramatic Performance and Best Actress.

Davis has not revealed her current salary.

Davis became part of a controversy after her alcohol addiction was revealed.

Additionally, her relationship with ex-boyfriend Jeremy McConnell was also surrounded by several controversies.

Jeremy was accused of physical assault.

At present, there are no rumors concerning Davis and her career.

Additionally, she weighs around 51 kg.

Furthermore, her natural hair color is brown and her eye color is gray.

Davis is active on social media.

Similarly, her Facebook page has more than 3.3M followers.