Stephanie Grisham is an American White House official and the chief of staff for first lady Melania Trump. Stephanie was previously married and presently not dating anyone. 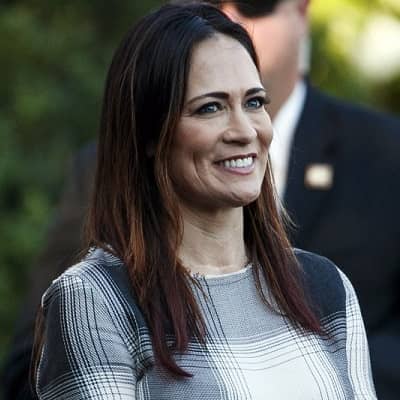 The team is small, but mighty.

She recognizes it's a complex issue, she definitely believes in strong border laws. She wants to make sure the kids are well taken care of.

Previously, she was married to her longtime boyfriend Dan Marries, a news anchor on April 7, 1997. The pair welcomed a son Kurtis Marries (aged 18 in 2019) but the couple divorced in 2004.

She also has another son named Jake (age 9 in 2017) but the identity of his father has not been revealed yet. Her son, Kurtis graduated in 2016 in Arizona.

Who is Stephanie Grisham?

Stephanie Grisham is an American White House official is appointed to be the 30th White House press secretary and was Donald Trump’s presidential transition team member.

She was born in 1977 in Arizona, USA. Her birth name is Stephanie Ann Sommerville and she is currently 42 years old. She has not disclosed any information regarding her siblings, parents, and childhood.

Talking about Stephanie’s education history, she has not disclosed the educational institution’s names she attended.

Stephanie Grisham was the spokeswoman for Mitt Romney’s 2012 presidential campaign and for AAA Arizona in 2007. She was an independent contractor in 2015 and worked as a press coordinator for Pope Francis’s visit to Philadelphia.

However, while she was serving as a member of the Trump transition team, it was reported that Arizona House speaker David Gowan paid her $19,000 in state salary over an 8-week period

Stephanie Grisham will replace Sarah Sanders as White House press secretary and White House Communications Director which was announced on June 25, 2019, by First Lady Melania Trump via Twitter. And, finally, she joined the office in July 2019.

It seems Grisham has not been awarded and nominated for her work till date.

She has an estimated net worth of around $500k and she has earned that sum of money from her professional career. However, her salary is in under a review.

There was a rumor regarding the replacement of Sarah Sanders by Stephanie and the rumor ended after Stephanie joined the office in July 2019.