Stephanie Leonidas is married to Robert Boulter, an actor. They have been married for five years. The coupled tied the knot on 31st December 2016.

Stephanie often posts about them together on Instagram and expresses their love for each other. The couple is leading a happy conjugal life. 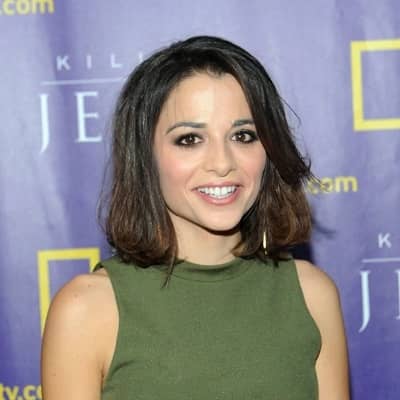 “I never really thought about what characters I play. I always just wanted different characters

“The sets on ‘Defiance’ are incredible. I’ve never really seen a set like this, where the world is so built around us. There’s not too much left for us to have to imagine.”

Who is Stephanie Leonidas?

Stephanie Leonidas is an English actress famous for her work as Helena in the fantasy film MirrorMask. Also, famous as Irisa in the American science fiction television series, Defiance.

She played major roles in several made-for-TV films, including Daddy’s Girls and Ordeal by Innocence.

Leonidas is the daughter of a Greek Cypriot father Harry Leonidas and an English mother Lesley Leonidas. Stephanie has one younger sister Georgina Leonidas and a younger brother Dimitri Leonidas, who are also actors.

At the age of eight, Leonidas started acting in community theatre and at the age of nine, she acquired an agent and began to work in television.

She is an actress known for MirrorMask(2005), American Gothic (2016), and Defianace (2013). Later, she acted in professional stage productions of The Sugar Syndrome and influence.

She starred in Neil Gaiman and Dave McKean’s MirrorMask in the dual roles of Helena and the Dark Princess in 2005.

Some of her theoretical roles include Adela in the production of Lorca’s The House of Bernarda Alba at Coventry’s Belgrade Theatre, and Dani in The Sugar Syndrome, staged at the Royal Court Theatre Upstairs, London, in 2003.

On May 8, 2011, she starred in the BBC docudrama Atlantis, which aired on BBC One and BBC One HD. Also, she starred as Irisa Nolan in the science fiction TV series Defiance, which ran for three seasons.

Stephanie is a successful English actress and earns a good amount of income. However, her exact net worth and salary are not disclosed yet.

As per sources, her estimated net worth is around $1million-$3miilion.

Stephanie has not been a part of any kind of unwanted rumors as she maintains a distance between her personal and professional life.

Leonidas stands tall at a height of 5feet and 3 inches and weighs around 51kg. Her other body measurements are 33-25-35. She has Light Brown colored hair and dark brown eyes.

She wears a bra size of 38B and her dresses size of 6.