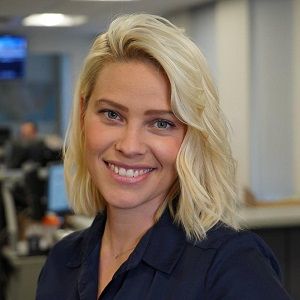 When children do not have three square meals a day, a proper education, and at least one adult who they know loves and is committed to them, its very unlikely they will grow up to be productive citizens of the world.

The 47-year-old American actress, Stephanie is a married woman. She has been married twice in her life. Previously, she was married to celebrity chef Bobby Flay on February 20, 2005. The couple stayed in the married relationship for almost a decade and finally divorced in 2015.

After separating with Bobby Flay, Stephanie began dating businessman Dan Benton. After dating him for almost two years, she tied the knot with him on September 1, 2017, in Katonah, New York. Although, there is not even a single news of her children to date.

Currently, Stephanie and Dan are enjoying their married life and living elegantly.

Who is Stephanie March?

Stephanie March is an American actress. She is well known for her roles in Mr. & Mrs. Smith, The Invention of Lying, and Law & Order: Special Victims Unit.

Furthermore, she has also appeared in several TV series such as Conviction, Rescue Me, Happy Endings, and a few others.

Stephanie was born on July 23, 1974, in Dallas, Texas, USA. She is the daughter of Laura Len and John Abe March IV. Talking about her nationality, she is American and her ethnicity is Mixed (German, Dutch, Irish, and English).

From the beginning of her childhood, she had a keen interest in acting and also began to learn from a very early age.

Stephanie began her acting career as a stage actress in her college days. In 1997, she made her television debut as Arlene in Early Edition. Soon after that, she landed the role of ADA Alexandra Cabot in the hit NBC series, Law & Order: Special Victims Unit.

Moreover, the veteran actress appeared for almost 12 years in the series from 2000 to 2012. Furthermore, Stephanie also starred in a couple of famous series such as Grey’s Anatomy, Rescue Me, Happy Endings, and Made in Jersey.

Besides her TV career, she made her film debut in 2000 as Miss Forsythe in Death of a Salesman. After a couple of years, the 43-years-old actress also starred in several popular films Mr. and Mrs. Smith, The Invention of Lying, Why Stop Now?, and Innocence.

Apart from acting, she is also a celebrity ambassador for World of Children.

Being a famous actress, she earns a healthy amount of money from her profession. Currently, she has a net worth of $4 million.

So far, she has not won any awards in her career to date. Although, she has been doing a great job and her works have been also loved by her fans.

Back in the divorce between Stephanie and Bobby Flay, there was a rumor that Bobby cheated on her and finally the couple got divorced. Apart from that, she has never been involved in any controversy in her career to date.

Stephanie has a height of 5 ft 9 inches and weighs 63 kg. Furthermore, she has a pair of beautiful blue eyes and blonde hair. Besides this, her body measurements are  35-27-38 inches.