Stephanie Matto is openly a bisexual. She is possibly single as of now.

Earlier, she was rumored that she engaged with YouTuber Nik Stone aka Your Wet Sock. When Stephanie posts a pic of her and Nik on her respective Instagram account where she referred to him as “hubby” in the caption.

Similarly, she was previously in a relationship with Erika Owens. The duo together also appeared in season 4 of Before the 90 Days but sadly their relationship ended in a May 2020 episode. 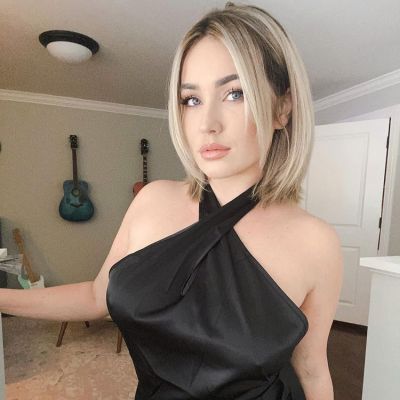 Who is Stephanie Matto?

Stephanie Matto is an American author, content creator, entrepreneur, and social media influencer. She is popular as YouTuber and better known online as Stepanka.

Matto is currently starring on 90 Days: The Single Life.

Stephanie was born on the 21st of September 1990, in Derby, CT. According to her birthdate, she is 31 years old as of 2021. Her Sun sign is Virgo. She follows the Christian religion.

She is the daughter of Bruce Wayne Matto (father) and Magda Ballaro (mother). Her father was a businessman and already passed away in 2012. She hasn’t yet disclosed her sibling details in the media.

Further, her academic background is under the curtains at the moment. She holds an American nationality and belongs to the Caucasian ethnicity.

In May 2013, she uploaded her first video titled “Trisha Paytas History of my Insanity BOOK REVIEW” on her YouTube channel. She uploads different content videos on her channel like fashion, lifestyle, beauty, clothing hall, ASMR videos, and so on. As of now, her channel has garnered more than 374k subscribers. Matto is also popular on Instagram where she posts her eye-catching pictures.

Matto was featured in a video, “Youtubers Read Mean Comments” alongside Julien Solomita and LandonProduction. Apart from social media sites, she is an author and has published a book named “Mean Boys & Memories: A Compilation of My Most Hideous, Outrageous, and Embarrassing Moments”. She shared her personal experience in life before rising to stardom in her book.

Matto appeared on various other TV shows including Strictly Stalking, 90 Day Fiance: B90 Strikes Back!, and more. In 2009, she portrayed the role of Alice in the movie She’s Got It.

In June 2020, Stephanie rumored fiance accused her of pretending to be bisexual to get cast on 90 Day Fiancé and to get more views on her social media.

Stephanie lives a luxury lifestyle. According to other online sources, she is estimated to have a net worth of around $3-4 million. Similarly, she earns almost $50 thousand per week by selling her farts in a jar.

Furthermore, her real estate and other earning are still under review.

Stephanie stands at the height of 5 feet 7inches tall and her weight is about 58 kg. Likewise, she has a blue pair of eyes and she has blonde hair color.

She does piercing on her ears. Her shoe size is 6 (US).

Besides YouTube, Stephanie is active on Instagram under the username @stepankamatto where she has more than 279k followers.

Similarly, she has over 18.3k followers on her Twitter account and 3.2k followers on Facebook. She is also active on Tiktok with 103.9k followers. Further, she has shared her email id [email protected] for any business inquiries.