Stephanie McMahon is married and a mother of three.

Furthermore, they later married on October 25, 2003. The wedding ceremony took place at St. Teresa of Avila Church in Sleepy Hollow.

The couple has three daughters Aurora Rose Levesque, Murphy Claire Levesque, and Vaughn Evelyn Levesque. The pair’s marriage is going strong as there is no news regarding any extramarital affairs at present. 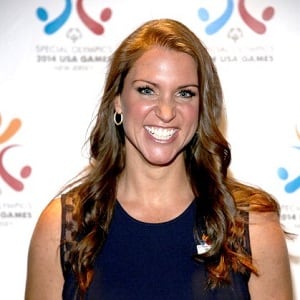 Whether you're a mother or father, or a husband or a son, or a niece or a nephew or uncle, breast cancer doesn't discriminate.

I think I have let ego get in the way sometimes - the pendulum swung pretty strongly. I was maybe a little overconfident at one point in my time, and then I went way the other way and thought I wasn't capable of anything. Stephanie McMahon.

Be grateful. That's one of the most important lessons in life, I think, is to just be grateful for every minute, every moment.

Who is Stephanie McMahon?

Stephanie McMahon is an American professional wrestling personality and businesswoman. She currently serves as the chief brand officer (CBO) of WWE. Additionally, she is also the on-screen commissioner of WWE’s Raw brand.

McMahon was born Stephanie Marie McMahon in Hartford, Connecticut on September 24, 1976. She was born to parents Linda and Vince McMahon.

Additionally, she has one brother, Shane McMahon. As both of her parents were part of the wrestling world, it comes as no surprise that she became interested in the world of wrestling in her childhood years. She is of American nationality. Furthermore, she belongs to the Irish-American ethnic background.

Talking about her education, McMahon attended Greenwich High School and graduated in 1994. In addition, she later attended Boston University where she has a degree in Communications.

McMahon initially appeared in World Wrestling Federation merchandise catalogs. After earning her degree in communication, she began working for the WWF full-time. She started her career there as a model however, she later worked as an Account Executive for the WWF offices located in New York.

McMahon has also appeared in several storylines in the WWE and WWF. She first debuted in a storyline involving The Undertaker and her father Vince. She has mostly appeared as a villain in most of the storylines. From 2013 to 2016, she and her husband Triple H formed The Authority.

Currently, she serves as the commissioner of the Raw brand. Apart from her career in wrestling, McMahon has also appeared in several other television series including ‘The Howard Stern Show’, ‘Opie and Anthony’, and ‘Jimmy Kimmel Live!’.

McMahon has won the Slammy Awards two times. She was also the Woman of the Year in Pro Wrestling Illustrated in 2000. Additionally, she received the Stuart Scott ENSPIRE Award in 2017.

McMahon has not revealed her current salary. Additionally, there are no details available regarding her estimated net worth at present.

McMahon has been involved in several controversies in her career. She has been criticized several times for her behavior towards Chyna. As Chyna and Triple H were together before Stephanie began dating Triple H, she used all the power in the company to ensure that Chyna was fired.

Additionally, she became part of a controversy in 2001 after she compared the 9/11 terrorist attack to her father’s ongoing trial. At present, there are no rumors concerning McMahon and her career.

Talking about her body measurement, McMahon has a height of 5 feet 9 inches (1.75 m). Additionally, she weighs around 65 kg. She has a measurement of 38-26-36 inches. Furthermore, her hair color is dark brown and her eye color is blue.