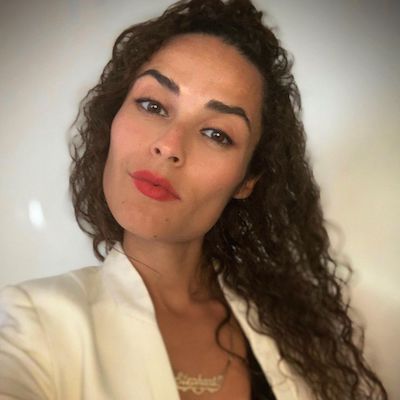 Stephanie Nogueras is currently in a loving relationship. She is dating a guy named Krystof. She often shares their lovely moments in her social posts.

On 05 Jan 2021, Stephanie uploaded series of their pictures on Instagram. In one of the photos, she and her boyfriend are smiling and holding their pet dog Pimby.

Who is Stephanie Nogueras?

Stephanie Nogueras is an American actress. The public noticed her for appearing in a television series Switched at Birth, Grimm, and Unfriended: Dark Web.

She is filming for a TV series The Myth of Control where she is playing the role of Victoria.

She was born on 18 Nov 1989 in Camden, New Jersey, United States. The name of her mother and her father’s name is not revealed.

Stephanie’s ancestry is Puerto-Rican and talking about her academics, she has attended Rochester Institute of Technology.

Stephanie Nogueras is popular for her acting as she has appeared in the TV series, Switched at Birth. Her character Natalie Pierce from 2013 till 2017 is loved by the audience.

The other main casts of this family drama show were Katie Leclerc, Vanessa Marano, Constance Marie, and more.

In 2018’s movie Unfriended: Dark Web where she played Amaya is also appreciated by the viewers.

Moreover, her other acting credits are Grimm as Elly Mahario, Love Daily as Deaf Student, The Magicians as Young Harriet, Criminal Minds as Alma Hernandez, etc.

At present, her estimated net worth is around $500 thousand US. However, her salary and other earnings are unknown.

This Switched at Birth actress is keeping herself far from rumors and is also away from any desperate scandals.

Regarding Stephanie Nogueras’s body features, her height is 5 ft 1 inch and her body weight is 45 kg.

Moreover, her eyes are brown, her hair is also brown, and has a fair skin complexion.

Stephanie is available on social sites. She has Instagram and Twitter accounts with more than 11k and 5.3k followers respectively.

But she is also active on the Facebook platform with more than 3.7k followers.