Stephanie Ruhle is an NBC News Biz Correspondent, MSNBC Anchor, podcaster. Has worked for BloombergTV and CSFB/Deutsche Bank. Stephanie is married and has three children.

They met while working with ‘Credit Suisse’. The couple married a few years later. Her husband Andy Hubbard is a businessman. Since 2018 he is Managing Director at HausMart.

Stephanie and Andy have three children, two sons- Harrison and Reese, and a daughter Drew. They live in Manhattan.

Talking about her social circle, she has a good relationship with the CEO of Under Armour Kevin Plank. 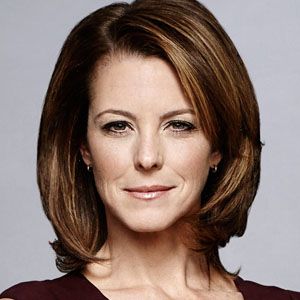 Having a trade deficit and a budget deficit, it's two different things.

When you look at a company like Amazon, one of the reasons that Amazon is one of the most powerful companies in the world is because we want to buy cheap stuff. If Donald Trump were to change trade laws, we couldn't buy the cheap stuff or in our Wal-Marts, they would cost a whole lot more.

What I don't understand is what America really wants.

Who is Stephanie Ruhle?

She was named the new permanent anchor of The 11th Hour on January 27, 2022, after acting as one of several rotating hosts following the resignation of original anchor Brian Williams from the network in December.

Ruhle was born Stephanie Leigh Ruhle in 1975 on December 24 in Park Ridge, New Jersey, the United States of Dutch ancestry. As of 2022, she is 46years old.

Her mother raised her in their hometown, Park Ridge. She has a sister who lives in Ridgewood and her Caucasian grandparents reside in Fort Lee.

Moreover, Stephanie is very close to her mother and in October 2017, brought her to the MSNBC show and described her as one of the suburban white women who voted for President Trump.

Stephanie studied in a local school and then enrolled at Lehigh University, Bethlehem, Pennsylvania. She graduated with a degree in ‘International Business’ and continued her education in Guatemala, Italy, and Kenya.

In 2017, she returned to her alma mater for the commencement speech.

Stephanie joined ‘Credit Suisse’ in 1997 where she worked for six years in hedge fund sales. Later she was promoted to Vice President of Credit Suisse.

In 2003, she joined Deutsche Bank and worked as a credit salesperson, and was promoted to director of the Global Markets Senior Relationship management.

In 2011, Stephanie was Bloomberg Television’s managing editor and news anchor. She co-hosted along with Erik Schatzker for the TV program ‘Inside Track’. The same year she hosted the show ‘Bloomberg Go’ with David Westin.

In April 2012, along with Bloomberg reporters Bradley Keoun and Mary Childs, she broke the story of the London Whale, the trader behind the 2012 JPMorgan Chase trading loss. Stephanie interviewed Matha Stuart in 2013. Similarly, in 2015 she interviewed Donald Trump.

In 2015, Stephanie produced and hosted a documentary ‘Haiti: Open For Business?’. The documentary explores the emerging market five years after the devastating earthquake.

She also appeared in the short film ‘Shark Land: A Mission Blue and Fusion Expedition’. It especially focuses on the dangers faced by the sharks of the National Park ‘Cocos Island’.

Stephanie Ruhle is also the journalist for Shape magazine’s website Shape.com. In October 2012, Stephanie was featured on the cover of ‘Working Mother’ and ‘Fit Pregnancy’ on the April/May 2013 issue. She has been profiled by 201 Magazine, IWantHerJob, Business Insider, and Glass Hammer.

Stephanie incorporated with ‘NBC News’ in April 2016. She is a business and political correspondent. Moreover, she is also an anchor of the American daily news-talk TV program ‘MSNBC Live’. She co-hosts a weekly business program of ‘MSNBC’ called ‘Velshi & Ruhle’, along with Ali Velshi.

-Ruhle wrote a provocative reply to Paul Tudor Jones in the ‘Huffington Post’ in June 2013 when she responded to his comments on Wall Street’s lack of female traders.

-And when she spoke with Donald Trump supporters she was accused of provocating them against Hillary Clinton.

What does Andy Hubbard do for a living?

What nationality is Stephanie Ruhle?