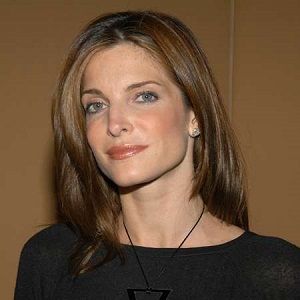 Grooming is 10 times more important than makeup. I use a hair gloss with a teeny bit of color in it that makes my hair very shiny.

I prefer my body after I've had kids to before. I like a womanly, shapely figure. I'm more secure as a woman. I know who I am.

I love living with animals. And my children love animals. I love walking around and being with the horses. But the deer? They're naughty.

I wanted to be Brooke Shields, and my mother was an aspiring photographer, so I was, of course, the only one who would sit still long enough for her to get things in focus, and I loved doing that.

Like most other men she dated, Peter is also roughly 21 years senior to her. They married on July 14, 1995, in Paris, France.

Before the marriage, Stephanie had already given birth to the couple’s first child (and Seymour’s second) Peter II in December 1993.

She then gave birth to the couple’s second child, son Harry Brant in 1996. Again, in 2004, the couple welcomed their third child, daughter Lily Margaret.

In March 2009, they separated and Stephanie filed for divorce from Brant after successful 14 years of marriage, but they got back together in 2010.

Stephanie Seymour and Peter Brant’s son Harry Brant was born in the year 1996. Her son Harry was found dead at the age of 24 due to an accidental drug overdose. He was one of the “It” boys of the next-generation jet set and a new-look.

Stephanie Seymour dated an American businessman John Casablancas from 1984 to 1988. He is 24 years older than her. Whereas, Stephanie was 16 at that time and John was 40. John was also married to model Jeanette Christiansen at that time.

Stephanie dated country musician Tommy Andrews in 1988. They married, the next year in 1989. The marriage didn’t last for long and the couple separated early enough in 1990. But, this marriage resulted in Seymour’s first child, son Dylan Thomas Andrews (born February 5, 1991).

Then, she dated Warren Beatty in April 1991. He is 31 years her senior. She dated singer Axl Rose after dating for two years, the duo engaged in February 1993. But, the engagement resulted in a sour relationship and they split soon in March 1993.

She dated Charlie Sheen in 1992 and he revealed that he was having a good time with her and they were madly in love.

Who is Stephanie Seymour?

Stephanie Seymour is an American model and actress who has modeled for several high-end brands and companies and has appeared in numerous issues of magazines like ‘Vogue’ and ‘Playboy.’

Besides this, she has worked as the main lingerie and hosiery model for Victoria’s Secret.

Stephanie Seymour was born in San Diego, California, United States on July 23, 1968. Her birth name is Stephanie Michelle Seymour and she is currently 50 years old.

Her father’s name is Peter Brant and her mother’s name is Margaret Ann (Pozun) Roark. There is not much information about her family and her childhood.

Her birth sign is Cancer. There is no information about her siblings.

In the year 1983, she was a finalist in the Elite Model Management Look of the Year modeling contest. After this, she modeled for ‘Sports Illustrated Swimsuit Issue’ and ‘Vogue.’

Whereas, from 1993 to 1999, Seymour served as one of the lead models for Victoria’s Secret. During this time, she also posed for Playboy magazine.

Then in 2006, she appeared in a campaign for the high-end fashion brand, Gap, along with her kids. The American model was then modeled for Salvatore Ferragamo’s campaign for the fall/winter 2007/2008 collection.

Stephanie Seymour’s first acting role was in the video game titled ‘Hell: A Cyberpunk Thriller’ in 1994. She then appeared in the flick ‘Pollock’ in 2000. Two years later, she got featured in an episode of the drama ‘Law & Order: Criminal Intent.

She has an estimated net worth of around $100 million (as per 2022 data) and she has earned that sum of money from her professional career.

There was a rumor that Stephanie Seymour cried from her bikini model when her bikini was ripe.

Stephanie Seymour has a height of 5 feet 10 inches. Additionally, she weighs 67Kg.

Stephanie’s hair color is light brown and her eye color is grayish-blue. Furthermore, her dress size is 10 (US) and her shoe size is 9.5 (US).