Talking about her relationship details, Stephanie Sigman is happily living a married life with a well-known producer and director, Brian Andrew Mendoza.

Other than that, Stephanie has been secretive about her relationship details and related news. She has kept her personal profile low-key. 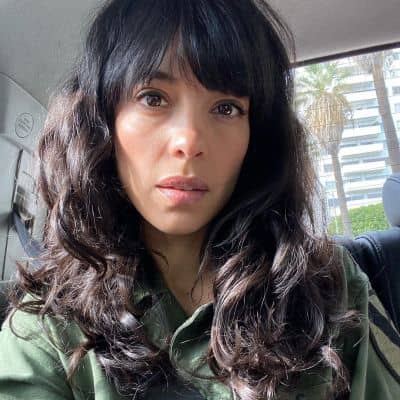 Who is Stephanie Sigman?

Stephanie Sigman is a well-recognized Mexican-American actress and television personality. Sigman is widely famed for her role in the 2011 Mexican crime drama film, Miss Bala.

Stephanie Sigman was born on 28 February 1987. At present, she is 34 years young star. Likewise, her birthplace is Ciudad Obregon, Sonora, Mexico.

Stephanie is the daughter of her father, Lee Sigman whereas her mother is Esthela Conde. Moreover, she has two siblings named Kenneth Ray Sigman and Salvador Sigman.

Talking about her nationality, Sigman holds a Mexican-American identity whereas her ethnicity is Ashkenazi Jewish, Italian, and Mexican.

Regarding education, the actress might have completed her graduation from the university of the town. She has not mentioned her academic background to the public.

Stephanie started her career featuring on Mexican television ahead of making her film debut in Rio de Oro. She then portrayed the lead role of Laura Guerrero in the Mexican crime drama film, Miss Bala in 2011.

Moreover, she was selected as the Mexican entry for the Best Foreign Language Film at the 84th Academy Awards.

Later, Sigman was nominated for a Dublin Film Critics’ Circle Award in 2011 for her performance in the film. In 2013, Sigman portrayed the prime role in the USA Network drama pilot, The Arrangement against Bryan Greenberg.

In the same year, Stephanie performed in a recurring role on the FX crime drama series, The Bridge.

The actress appeared in the Arctic Monkeys music video for “Snap Out of It” 2014. In 2015, she also performed in the Netflix crime thriller, Narcos in the role of Valeria Velez.

In the same year, the star performed in the James Bond film Spectre and became the second Mexican actress to play a Bond girl.

Some of her remarkable roles in films are Spectre, War on Everyone, Shimmer Lake, Once Upon a Time in Venice, and Annabelle: Creation. She has also appeared on television series such as The Bridge, Narcos, American Crime, and S.W.A.T.

A famed actress, Sigman has earned a handsome amount of money from her profession. She has been active in her profession from the year 2006 till the present.

As per celebrity net worth, Stephanie Sigman has an estimated net worth of $2 million.

Stephanie faced racial discrimination after her audition for the reality television contest, America’s Next Top Model. Other contestants bullied her and also opposed not being allowed to participate in the show for her Mexican heritage.

However, they did not know that Sigman had gained American citizenship through her American father. The producers of the show liked her but the actress decided to leave the show to avoid the company.

Other than that, Stephanie has never been part of any controversial matter or rumors till now. –

It seems that Sigman prefers enjoying her personal life and does not want to merge it with her professional life.

She stands at a height of 5 feet 9inches. Also, she has a balanced body weight of 61 kg.

Furthermore, Sigman has brown eyes whereas her hair is black. Her body measurement is 35-25-36 inches(chest-waist-hip) respectively.

Regarding her social media presence, Stephanie Sigman is an active personality on social media. Stephanie has more than 146k followers on her official Instagram account @stephaniesigman.

She is also active on Twitter with around 21.2k followers.

Moreover, Sigman is also available on Facebook with nearly 9.3k fans and supporters.