Stephen A. Smith is a sports analyst and journalist on ESPN. He is also an actor, radio host. Stephen was previously engaged and has two daughters.

Stephen A. Smith’s relationship status is currently single and self partnered.

He once shared his romantic life during an interview with GQ magazine. He said that he was previously engaged, the woman’s name he did not reveal. Also, he has two children, both daughters. 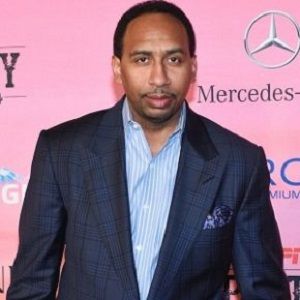 Quick Facts of Stephen A. Smith

You have haters from all walks of life. I could care less who wants me to fail. They inspire me.

A child is not an adult, a child didn't ask to be here. Any man that doesn't take care of his responsibilities to his family and to his children, do me a favor STOP calling yourself a man..at least have the decency to admit that you're a boy. You don't know what manhood is. I think that just talking about what guys shouldn’t do, we got to also make sure that you can do your part to do whatever you can do to make, to try to make sure it doesn’t happen.

Relationship Facts of Stephen A. Smith

Who is Stephen A. Smith?

Stephen A. Smith is a famous American sports journalist and sports television personality.

He has established himself as a successful radio host and actor.

Stephen is best known as a sports commentator on ESPN First Take and his unique argumentative expressions and commentaries.

Stephen A. Smith was born Stephen Anthony Smith on October 14, 1967, in the Bronx, New York City to Janet Smith.

His nationality is American and his ethnicity is All-American.

His father was a manager of a hardware store and baseball player. His mother died in the year 2017, due to cancer and his father died in August 2018.

Moreover, he was born in a middle-class and has four elder sisters and a younger brother, and a half-brother. One of his brothers’ names is Basil, who expired due to a car accident.

He was raised in the Hollis, Queens section of Queens along with his elder sisters.

Smith’s parents originally belonged to St. Thomas Virgin Islands and his grandparents were of Afro-American descent.

Stephen was educated at Thomas Edison High School in Queens. Then he joined the Fashion Institute of Technology and after a year, he got a basketball scholarship.

Through the scholarship, he went to Winston-Salem State University in North Carolina where he played basketball under his coach Clarence Gaines.

Stephen began his journalism career in 1994 with Winston-Salem Journal. That same year, he started working with Greensboro News and Record and the New York Daily News.

Later that year, he was signed as a writer for The Philadelphia Inquirer.

Likewise, he also worked as a general sports columnist for the Philadelphia 76ers. Smith began his television career in 1999 working for CNN/SI.

In 2005, he was appointed as the host of the ESPN show, Quite Frankly with Stephen A. Smith. In late 2009, he started working for Fox Sports Radio as its on-air contributor.

Following year, he became the host of Fox Sports Radio Morning Show. In April 2012, Smith signed a permanent contract with First Take. Since then, he is working as a sports commentator on ESPN First Take.

Besides journalism, Smith is also an actor. He made his debut in acting in 2007, on the ABC serial drama General Hospital in which he played the role of Brick.

Later the same year, he appeared as Allan in the romantic comedy film I Think I Love My Wife. Furthermore, in 2014, he appeared in a commercial series, The Little Voice in Your Stomach.

His annual salary on ESPN First Take is reported to be more than 3 million dollars and he has a net worth of $10 million US(2017).

The Latest- His relationship with colleagues and higher-ups definitely has to be redefined. Read this zing that was zinged on MSN, 3 days ago ‘Introducing Smith to a non-sports audience, Oliver warns that Smith “tends to be loud, wrong, and take pointlessly dramatic pauses”.

A clip is then presented from Smith’s radio show, featuring Smith engaging in several pauses as he criticizes Morey for his social media comments.’

He has been involved in controversies several times in his career. He is often criticized for his argumentative way of commenting. Furthermore, this journalist was suspended from ESPN for a week for his bad comments against women.