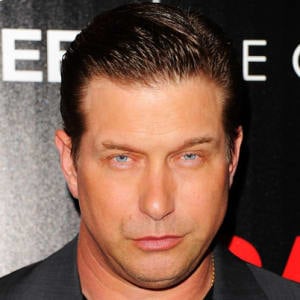 Getting movies made is not as difficult as people think. Making movies is easy. You get a script, you get a director, you raise the money, you make the movie.

When I was younger I wanted to be in the loop and pimp around town with the big shots and supermodels and all that crap. These days, though, I'd rather ride my motorcycle during the day, then have my kid chase me around the living room with a broom when I get home. I don't feel the need to feed my ego the way I used to

I called Alec up and said, 'I'm going to do a comedy with Pauly Shore where we play two stoners trapped in a biosphere. My brother replied, 'I think that is the single most career-ending decision you can possibly make.

Stephen Baldwin is a married man. He is married to the Brazilian graphic designer Kennya Baldwin. The pair married on 10 June 1990. They have two children together: Alaia and Hailey Baldwin. Both of their daughters are models.

Who is Stephen Baldwin?

Baldwin was born as Stephen Andrew Baldwin in Massapequa, New York on May 12, 1966. He was born to parents Carol Newcomb and Alexander Rae Baldwin, Jr. He has three elder brothers: Alec, Daniel, and William. All three of them are actors. Additionally, she has two sisters, Elizabeth Keuchler and Jane Sasso. Baldwin developed a keen interest in acting as a child. He is of American nationality. Furthermore, he belongs to the mixed ethnic background of English, Irish, Scottish, French-Canadian, and German.

Talking about his education, Baldwin attended the American Academy of Dramatic Arts.

Baldwin initially appeared in ‘The Lawrenceville Storie’ and ‘American Playhouse.’ In addition, he played the role of Luna Park Drunk in the movie ‘Homeboy.’ He also appeared as Anthony Golikov in ‘The Beast of War.’ In 1099, he had the role of Bobby in the TV series ‘Family Ties. Since then, he has appeared in several other movies and television series. At present, he has more than 100 credits as an actor.

Some other movie and television series that Baldwin has appeared in are ‘The Least of These: The Graham Staines Story’, ‘Kaibigan’, ‘The UnMiracle’, ‘Tapestry’, ‘The Apostle Peter: Redemption’, ‘No Panic, With a Hint of Hysteria’, ‘Faith of Our Fathers’, ‘The Networker’, ‘The Costume Shop’, ‘In the Life with Steve Stanulis’, ‘I’m in Love with a Church Girl’, ‘Loving the Bad Man’, ‘Let the Game Begin’, ‘Shoot the Duke’, ‘The Genius Club’, ‘Jesse Stone: Night Passage’, ‘CSI: Crime Scene Investigation’, ‘Six: The Mark Unleashed’, ‘Lost Treasure’, ‘Spider’s Web’, ‘Zebra Lounge’, ‘Batman Beyond’, ‘The Flintstones in Viva Rock Vegas’, ‘The Sex Monster’, ‘Half Baked’, ‘Crimetime’, ‘Dead Weekend’, ‘8 Seconds’, ‘Crossing the Bridge’, ‘The Young Riders’, and ‘Last Exit to Brooklyn’ among others. Stephen is also involved in activism works and politics.

Baldwin won the ACCA in 1995 for his performance in ‘The Usual Suspects.’ Additionally, he has also garnered the DVD Premiere Award, NBR Award, and Festival Award (in Hoboken International Film Festival).

Baldwin has not revealed his current salary. However, he has an estimated net worth of around $ 500 thousand at present.

Baldwin filed a $3.8 million lawsuit against Kevin Costner in December 2010. The lawsuit was over oil-separating technology that was used to help solve the BP oil spill in the Gulf of Mexico. Additionally, Baldwin became part of a controversy after he pleaded guilty to failing to file income taxes for the years 2008, 2009 and 2010. More recently, Stephen was involved in another controversy after he was caught on video having secret rendezvous with LA masseuse. At present, there are no rumors concerning Baldwin and his career.

Talking about his body measurement, Baldwin has a height of 5 feet 10 inches (1.78 m). Additionally, his hair color is dark brown and his eye color is blue.

All about the juicy bathroom talks of BFF Hailey Baldwin and Kendall Jenner!