Hosted the satirical Comedy Central program The Colbert Report from 2005-2014. Evelyn's husband and a father of three!

Colbert lives in Montclair, New Jersey, with his wife, “Evelyn McGee-Colbert” married on October 9, 1993, who appeared with him in an episode of Strangers with Candy as his mother. She also had an uncredited cameo as a nurse in the series pilot and a credited one (as his wife, Clair) in the film. McGee-Colbert actually met Jon Stewart, later a good friend of Colbert, before she met her husband in 1990 (at the world premiere of Hydrogen Jukebox).

She is the daughter of prominent Charleston civil litigator Joseph McGee, of the firm Buist Moore Smythe McGee. The couple has three children: Madeleine, Peter, and John. Colbert preferred that his children not watch his show The Colbert Report, saying that “kids can’t understand irony or sarcasm, and I don’t want them to perceive me as insincere. Colbert took the Myres Briggs personality test during a segment of his The Late Show which resulted in him being an INFP. 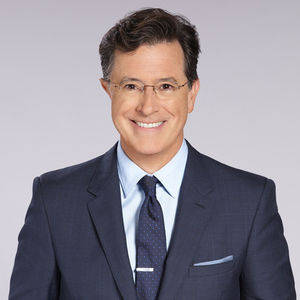 Cynicism masquerades as wisdom, but it is the furthest thing from it. Because cynics don't learn anything. Because cynicism is a self-imposed blindness: a rejection of the world because we are afraid it will hurt us or disappoint us. Cynics always say 'no.' But saying 'yes' begins things. Saying 'yes' is how things grow

Facts matter not at all. Perception is everything. It's certainty

In order to maintain an untenable position, you have to be actively ignorant. One motto on the show is, 'Keep your facts, I'm going with the truth.'

Who is Stephen Colbert?

Stephen Colbert is an American comedian, television host, and author. Colbert has hosted The Late Show with Stephen Colbert, a late-night television talk show on CBS, since September 8, 2015.

Stephen Colbert was born as Stephen Tyrone Colbert (pronounced “Col-BEAR”) on May 13, 1964, in Washington, D.C., U.S. His nationality is American and his ethnicity is Irish.

The host grew up in Charleston, South Carolina. He is the son of Lorna Elizabeth (Tuck) and James William Colbert, Jr., a doctor and medical school dean at Yale, Saint Louis University, and Music. He is the youngest of eleven children.

Colbert experienced what was likely the defining event of his childhood when his father and two of his brothers were killed in a plane crash. He grew introverted, finding solace in reading, especially science fiction and fantasy novels by authors such as J.R.R.  Tolkien. Colbert’s mother died at the age of 92 on June 12, 2013, after a period of ill health.

Stephen Colbert found a way to express himself through acting, which he did in several schools plays at Charleston’s Episcopal Porter-Gaud School. He later enrolled at Hampden-Sydney College of Virginia with the intention of becoming a philosophy major, but it wasn’t long before he reconsidered and transferred to Northwestern University, enrolling as a theater major.

After joining Chicago’s Second City comedy troupe, Stephen Colbert met comedians Amy Sedaris and Paul Dinello, and together they created and starred in both Exit57 and Strangers with Candy. In 1997, Colbert began appearing in episodes of The Daily Show. In 2005, he was given his own spin-off show, The Colbert Report. He published I Am America (And So Can You!) I in 2007.

In 2014, it was announced that Colbert would replace David Letterman as host of CBS’ Late Show.

After graduating from Northwest in 1986, Colbert moved to Chicago and took a job in the offices of the Second Comedy Troupe. Two years later, after taking improv classes there, he was asked to join the traveling group. He accepted the offer and spent the next two years on the road.

At the Second City, he met comedians Amy Sedaris and Paul Dinello, and together they created and starred in two Comedy Central series: the sketch show Exit 57 (1999-2000); a movie based on the show came out in 2006. In 1997, just before Strangers got picked up by Comedy Central, Colbert began appearing in episodes of The Daily Show Jon Stewart as a conservative correspondent. With both Strangers and The Daily Show running- and the latter becoming a huge hit in the early 200s- Colbert’s career was gaining traction, and his own show, a spin-off of The Daily Show was just around the corner.

A career in Comedy Central

In the fall of 2005, The Colbert Report began airing on Comedy Central, featuring Colbert as a starchy, blustery right-wing host- a parody of pundits who dominated the talk show airways. The show was instantly one of Comedy Central’s highest-rated shows, bringing in over a million viewers per episode in its first week.

Six months after The Colbert Report debuted, however, Colbert appeared as the featured speaker at the 2006 White House Correspondents’ Association Dinner. With President George W. Bush and first lady Laura Bush just a few feet away, Colbert proceeded to give an off-color tirade that left the audience silent and had the critics divided-some praised him and others said he had crossed the line into disrespect. The controversy only gained his popularity, though, and The Colbert Report has been a Comedy Central powerhouse, Winning several Emmys, including 2013 and 2014 awards for Outstanding Variety Series.

Offscreen, Colbert published I Am America (and So Can You!) in 2007 and contributed to 2004’s America (The Book): A Citizen’s Guide to Democracy Inaction. He also arranged with Jon Stewart the Rally to Restore to parody events staged by conservative commentator Glenn Beck and the Rev. Al Sharpton and to attempt to get a serious dialogue going on issues of the day.

On December 18, 2014, Colbert appeared in his final episode of The Colbert Report. His featured guest for the program was his friend “Grimmy”, also known as the grim reaper.

In April 2014, after David Letterman announced his plans to retire in 2015, Colbert was selected to replace him. “Simply being a guest on David Letterman’s show has been a highlight of my career”, Colbert said. “I never dreamed that I would follow in his footsteps, though everyone in late night follows Dave’s lead. I’m thrilled and grateful that CBS chose me. Now, if you’ll excuse me, I have to grind a gap in my front teeth.”

Colbert hijacked the 2016 Republican National Convention in Cleveland, Ohio on July 17, 2016. In 2017, Colbert hosted the 69th Primetime Emmy Awards. It was reported that Showtime was developing, Hello Nancy, a biopic based on the nonfiction book On Her Trail, Nancy Dickerson, TV News’ First Woman Star by John Dickerson, My Mother, with Colbert and his wife Evelyn serving as executive producers in 2018.

Colbert has an annual salary of $15 million from The Colbert Report and has a Net worth of $75 million dollars.

Stephen has a height of 5 feet 10 inches. His body weighs 82kg. He has black hair and black eyes.