Stephen Graham is married to Hannah Walters, an actress. The couple tied the knot on June 6, 2008.

They met and began dating while both were studying at the Rose Bruford College of Theatre & Performance. They now live in Ibstock, Leicestershire, after previously residing in London’s Beckenham district.

They have two children: a son and a daughter. However, they haven’t disclosed the names of their children. 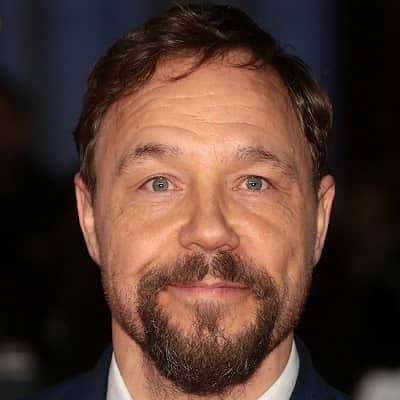 I work to live, not live to work, so my head's at home, not in some showbiz life.

If I get the walk of a character, that helps me find them. So I'm constantly looking at airports and train stations, registering walks.

There are moments when you're stepping out of a really nice car onto a red carpet, and you feel inside like, 'This is quite nice,' but I'm never whisked off my feet.

Who is Stephen Graham?

Stephen Graham was born on August 3, 1973, in Kirkby, Lancashire. As of now, he is 48years old. His father was half-Jamaican and half-Swedish.

He was raised by his social worker mother and stepfather, a mechanic who later became a pediatric nurse. He had a positive relationship with his biological father.

Stephen has one sibling named Aston Kelly. Talking about his nationality, he holds a British identity.

He attended Overdale Primary School in Kirkby, where local actor Andrew Schofield encouraged him to pursue an acting career at the age of eight after seeing him perform as Jim Hawkins in a school production of Treasure Island.

He then continued his education at Ruffwood Comprehensive, and at the age of 14, he was introduced to Liverpool’s Everyman Theatre, where he later trained at the Rose Bruford College of Theatre & Performance.

Graham received an RTS Award nomination for his work on The Street, as well as a British Independent Film Award nomination for his work on This Is England. He appeared in the music videos for Deadmau5 and Kaskade’s “I Remember,” Arctic Monkeys’ “Fluorescent Adolescent” and “When the Sun Goes Down,” Babybird’s “Unlovable” (directed by Johnny Depp), and Gazelle’s single “Finger on the Trigger.”

Stephen appeared in the BBC Christmas show Lapland in 2011. Eileen Graham’s role was recast with Dean Andrews when the series was remade as Being. He also appeared in a promotional video for “CODnapped,” a DLC pack for the video game Call of Duty: Ghosts.

Graham appeared as DS John Corbett in Series 5 of the BBC drama Line of Duty in 2019. Graham appeared on BBC Radio 4’s Desert Island Discs in November of that year. In January 2020, he appeared as Welsh detective “Taff” Jones in the ITV series White House Farm.

He appeared in the Philip Barantini-directed film Boiling Point in 2021, alongside Vinette Robinson, Ray Panthaki, and Hannah Walters.

Graham has kept his exact salary, income, and assets hidden until now. As per sources, Stephen Graham has an estimated net worth of around $5million.

Graham has struggled with depression throughout his life and revealed that he attempted suicide once in his early twenties. Before the truth was revealed, Stephen claimed he tried to conceal the marks around his neck with high-collar jumpers.

Stephen Graham stands tall at a height of 5 feet and 6inch and weighs around 70kgs. He has Light brown colored hair and beautiful blue eyes.

Stephen is not seen much active on social networking sites. He has his verified Twitter account under the username @StephenGraham73 with over 382k followers.

Moreover, there is one fan page account under the username @stephen.graham73 with 37.5k followers which posts all the updates about him.

Sean Gunn
Tags : Actor Line of Duty This is England