NFL player Sterling Shepard is married and a father of two.

Sterling Shepard is a married man. He is married to Victoria’s Secret Angel model, Chanel Iman. The couple tied the knot on 3rd March 2018.

The couple engaged on December 2nd, 2017. And now they have recently revealed that they are expecting their first child. His wife shared a picture of her baby bump and one a topless photo with him via her social media handle. 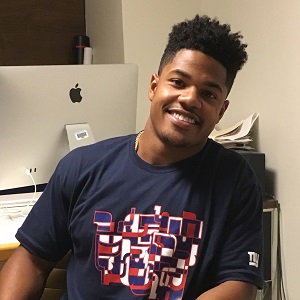 Who is Sterling  Shepard?

Sterling  Shepard is an American football wide receiver for the New York Giants of the National Football League (NFL).

His mother’s name is Cheri Shepard and his late father Derrick Shepard also played college football at Oklahoma and in the NFL from 1987 to 1991 as a wide receiver. He has two sisters: Ashleigh Shepard and Shelby Shepard.

He passed away when Sterling was six years old. His uncles, Darrell and  Woodie also played at Oklahoma.

He attended Heritage Hall School in Oklahoma City, Oklahoma. He played football, and basketball and ran track in high school.

He was selected for the Under Armour all-American Game. He committed to the University of Oklahoma to play college football. His nationality is American.

As a true freshman at the University of Oklahoma in 2012, he played in all 13 games with four starts and had 45 receptions for 621 yards and three touchdowns.

In 2016, he was 2nd round selection by the New York Giants drafted to be part of a dynamic duo for the Giants alongside star wideout Odell Beckham, Jr.

He caught passes from Eli Manning to begin his NFL career. The following week, he caught a season-high eight passes for 117 receiving yards during a 16-13 victory over the New Orleans Saints. On November 20, 2016, he had his third game in a row with a touchdown after he finished a 22-16 victory over the Chicago Bears with five catches for 50 yards and a touchdown.

He finished the season with 65 receptions for 683 receiving yards and eight receiving touchdowns. He was named to the PWFA All-Rookie Team following the season.

Sterling Shepard stands 5 feet 10 inches tall. His weight is 88 kg. His body type is Athletic. His hair color and eye color is black. His shoe size is unknown.