Steve Bunin is a two-time Emmy-winning television host for Seattle NBC station KING-TV. He is married and the couple has a baby girl. 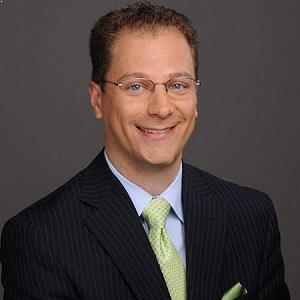 It was just my lifelong dream to be a sportscaster from when I was 12 years old. I realized quickly as a young Jewish kid it just wasn’t going to happen as a pro athlete. So, this was a great way to stay in sports.

Steve Bunin is a married man. He is married to rheumatologist Dr. Viviane Bunin for several years. The exact date of the pair’s wedding ceremony is not available at present. The couple has a daughter from this marriage, Gabriela.

In 2017, he visited the world-famous Chihuly Garden and Glass Museum with his wife and daughter.

Since there is not much information relating to the marriage, there has not been any news regarding divorce or any extramarital activities.

Who is Steve Bunin?

Steve Bunin is an American morning news anchor for Seattle NBC station KING-TV. He has hosted several shows throughout his career including ‘Outside The Lines’, ‘SportsCenter’ and ‘College Football Live’.

Steve was born in Seattle, Washington on February 20, 1974, to Russian ancestry.

Information relating to his parental background is not available at present. Similarly, he has not revealed detailed information regarding his early life and childhood to the public. He is of American nationality.

Talking about his education, Steve attended Syracuse University. Later, he graduated from there with a Bachelor of Science degree in Broadcast Journalism in 1996.

While his time at the University, Steve joined Delta Tau Delta International Fraternity. Furthermore, he previously graduated from Mercer Island High School in 1992.

Steve became the first anchor at ESPN to win the company’s prestigious “Game Ball” award for the character in 2010.

Later, from 2012-2014, he was the lead anchor for Comcast SportsNet Houston before the network went bankrupt.

Similarly, from 2015-2016, he was the host of the midday show on ESPN Radio KFNC Houston and the prime-time national show on SB Nation Radio.

In 2012, Steve has declared one of the “Twelve Broadcasters Viewers Deserve More Of”. Furthermore, he has also received the President’s Volunteer Service Award from Barack Obama, for his volunteer efforts, primarily with at-risk teens.

He has garnered six Emmy Awards and has been nominated for it nine times. He won the award for his groundbreaking interview with Carl Lewis.

Although Steve has not revealed information regarding his current net worth, it is believed to be in millions. Currently, there is no information relating to his recent salary for his journalism work.

Over the years, Steve has kept his personal life and career away from the media spotlight. He has not been part of controversies. Furthermore, there are no current rumors concerning him and his career.

Steve Bunin has a height of 5 feet 10 inches and he has an average weight. His hair color is light brown and his eye color is blue.