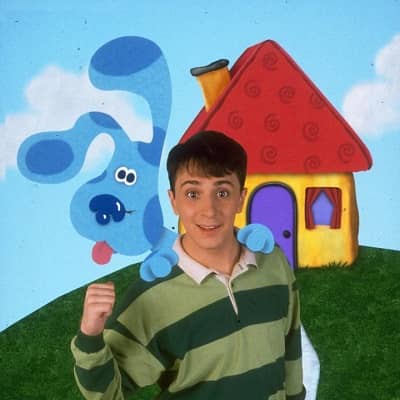 Nothing much is known about Steve’s personal life. There is no news regarding his love life. Believe it or not, this 47-year-old is still single. Currently, he might be in a relationship with someone that he wants to keep a secret. He might open something about her love life in the future so that we can have something to buzz about.

Who is Steve Burns?

Steve Burns is an American actor, musician, producer, director, and television host. Furthermore, he was the host of the preschool television program Blue’s Clues.

Steve Burns was born on October 9, 1973, in Boyertown, Pennsylvania, the U.S. Currently, he is 47 years old. His full name is Steven Michael Burns.

His mother is Janet Burns and his father Joseph Burns Jr was a former US Navy and the human resources director of Safeguard Business Systems. Unfortunately, his father left the world in 2015. Burns has two siblings Karen Burns and Jennifer Burns.

His nationality is American and his ethnic background is not revealed. Furthermore, Steve’s zodiac sign falls under Libra.

Talking about his education, Steve went to Boyertown Area Senior High School in Berks County and graduated in 1992. Then he attended the DeSales University in Center Valley, Pennsylvania, in the Lehigh Valley where he studied theatre. Then, Burns moved to New York City for his acting career.

Steve Burns started his career in 1995 when he acted in the tv series Law & Order. Moreover, he acted on various popular movies which include Blue’s Big Musical Movie, Christmas on Mars, Marie and Bruce, Netherbeast Incorporated, and Who Framed Jesus.

Burns has appeared on tv shows like Homicide: Life on the Street, Jack’s Big Music Show, Roll Play, The Bedtime Business Song, The Early Show, The Panel The Professionals, and The Rosie O’Donnell Show among others.

Likewise, he is famous for producing the long-running children’s preschool television program Blue’s Clues. He has also directed the tv show, Blue’s Clues & You!

Talking about his awards and accolades, he has been nominated twice for Daytime Emmy in 2001 and 2020.

This talented celebrity was rumored to be dead because of a drug overdose, was a drug addict, or was killed in a car crash. However, these rumors were all false. Regarding this matter, he spoke,

“The rumor mill surrounding me has always been really strange.” Some of these “specious claims” included: death from a heroin overdose, being killed in a car accident, and, like what was rumored to have happened to Paul McCartney in 1966, him having been replaced with a look-alike.

Steve stands at a height of 5 feet 6 inches. Burr has charming brown eyes and brown hair with fair skin. Additionally, his great personality is a trademark.

Steve is active on Instagram with over 103K followers.