The Young and the Restless actor Steve Burton is married and a father of three.

Previously, Steve has been married to Sheree Gustin since January 16, 1999.

The couple has welcomed three children, two daughters, and a son. Their first daughter, Makena Grace was born on September 5, 2003.

Then they welcomed a son, Jack Marshall Burton on March 26, 2006, and welcomed their second daughter, Brooklyn Faith Burton, on July 7, 2014.

Burton and Gustin announced their separation in May 2022, claiming that she had been disloyal to him by being pregnant by another man. 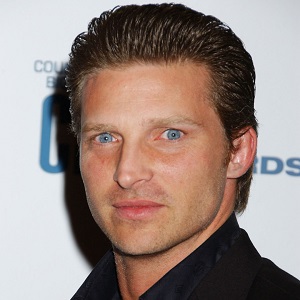 Actually, I get a little say in what my character would or wouldn't do

I do comedy shows. I make fun of myself, first of all.

Who is Steve Burton?

Steve Burton is an American actor and he is famous for his character of Jason Morgan on ‘General Hospital’ from 1991 to 2012 and from 2017 to the present.

He was born on June 28, 1970, in Indianapolis, Indiana, USA. His birth name is Jack Stephen Burton and he is currently 48 years.

Steve was raised in a suburb of Cleveland called Richmond Heights and made his way toward Hollywood. Steve holds American citizenship but his ethnicity is unknown.

He debuted his film career as a Local FBI Agent Ithaca in ‘The Manhattan Project’ in 1986/ later, he portrayed the role of Bar Patron in ‘Red Sun Rising’ in 1994, as Capt.

He performed the character of Chris Fuller in the television series ‘Out of This World’ from 1987 to 1991. Later, he appeared as Harris Michaels in ‘Day of Our Lives’ in 1998.

He played Jason Morgan on ‘General Hospital’ in 1991 and appeared as Jason in the first season of ‘General Hospital: Night Shift’ in 2007. Initially, he was auditioned for the role of his on-screen brother, A.J. Quartermaine.

Later, he joined the cast of ‘The Young and the Restless’ as Dylan McAvoy on January 29, 2013, but on October 6, 2016, he announced that she would leave the role of Dylan.

In June 2017, it was confirmed by ABC Daytime that he would be returning to ‘General Hospital’.

He has an estimated net worth of around $3 million and his main source of income is from his film and television career.

He decided that he would leave the role of Y&R’s Dylan McAvoy which he joined in 2012.

He has a height of 5 ft. 10 inches and he weighs 74 kg. Steve has got blue eyes and light brown hair.

Gavin Creel
Tags : American Actor The Young and the Restless

“This Is Not Mine”, Steve Burton Furious on Sheree Burton Pregnancy