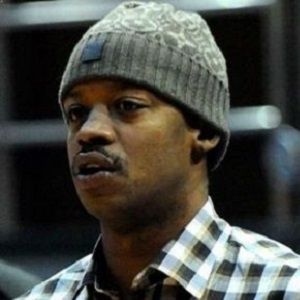 Previously, Steve Francis was married to Shelby. The couple got into a married relationship on 9 September 2006 and has been blessed with two children(Shailyn Francis and Steven II Francis).

After living together for several years they got divorced in the year 2016.

Talking about the present relationship of Francis, he is possibly single. There isn’t any solid proof that leads towards his re-marriage. Being a celebrity, his personal stuff is always a matter of discussion and interest to the public.

Who is Steve Francis?

Tall and handsome Steve Francis is a well-known retired American basketball player who has been playing basketball since his high school.

He is best known for his crossover dribble, driving skills, and flashy dunks.

Retired professional basketball player Steve was born and raised in Takoma Park, Maryland. He was born on 24th May 1979. He is of African-American ethnicity and has an American nationality.

After the death of his mother due to cancer he was raised by his grandmother. Francis has one younger sister Tiffany and two elder brothers Jeff Jr. and Terry.

For his schooling, he joined Montgomery Blair and attended San Jacinto College in Texas.

Later, he joined Allegany College of Maryland and transferred to the University of Maryland where he was named a finalist for the Wooden and Naismith Player of the Year Award.

Reflecting on the career journey of Steve Francis, he started playing basketball professionally after being selected by Vancouver Grizzlies in the 1999 NBA draft. Although being selected by Grizzlies, he refused to play from there, and later he was traded to Houston Rockets where he played till 2004.

Although he was unhappy being traded to Orlando Magic in 2004, he adapted to his new environment. On 22 February 2006, he was traded to New York Knicks and played for a year for the team.

On 20 July 2007, he signed a two-year contract with Huston Rockets with $6 million although Miami Heat offered the most money. In November 2010, he signed with Beijing Ducks of China but soon left in the same year to return to the United States.

Besides the NBA, he has ventured into several entrepreneurial projects including a construction company, boxing promotions, barbershop, clothing line as well as a hip-hop record label in the name of Mazerati Music.

His success in career path has paid him well financially making his net worth estimated to be $35 million.

He was rumored to steal more than $7000 worth of goods and cash from a parked BMW and suffered a controversy after his divorce with Shelby.

Steve Francis has a height of 6 feet 3 inches and weighs 91 kg. His hair color and eye color is black. His shoe size is unknown.