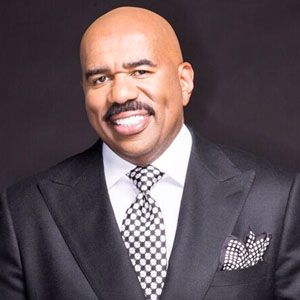 Failure is a great teacher, and I think when you make mistakes and you recover from them and you treat them as valuable learning experiences, then you've got something to share.

God has positioned me just this way to be just like I am, to say what I say how I say it.

I'm a comedian first. I've learned how to act. I just draw on life experiences and that's how I've learned. I didn't take classes or anything. I need no classroom.

Steve Harvey is a married man. He has married three women and has a total of seven children including three stepchildren.

First, he married Marcia Harvey with whom he has twin daughters and a son. The couple got divorced.

Steve again got married to Mary Shackelford and has a son with her. Due to a misunderstanding, they decided to divorce. The divorce was finalized in November 2005.

The couple has no children. Steve claimed that Bridges helped him a lot to change his life and motivated him.

Who is Steve Harvey?

Steve Harvey is an American comedian, radio personality, and television host. He is also a producer as well as an actor.

He was born to parents Jesse Harvey and Eloise Harvey. Jesse Harvey was a coal miner. He has a brother name, Terry Harvey. Further, there are no details regarding her family.

During her childhood, he moved to Cleveland, Ohio along with her family.

He is American by nationality and belongs to the All-American ethnic group. Also, there are no details about his childhood and early life.

He was also an active member of the Omega Psi Phi fraternity during college time.

Steve Harvey started her professional career in the entertainment field as a Comedian, Radio Personality, and Television Host.

On 8 October 1985 Harvey performed as a stand-up comedy at the Hilarities Comedy Club in Cleveland, Ohio.

He has been homeless for several years during the year the 1980s and was living a hard life.

He was a finalist in the Second Annual Johnnie Walker National Comedy Search and this led him to a starring role on the ABC show “Me and the Boys” in 1994.

Harvey continued his work in stand-up comedy in 1997 along with Cedric the Entertainer, D.L. Hughley, and Bernie Mac.

In 2003 he appeared in the movie The Fighting Temptations along with Cuba Gooding Jr. and Beyoncé Knowles.

In 2008, he hosted an event conducted by the Disney Dreamers Academy.

He hosted a weekday-morning radio program, The Steve Harvey Morning Show which was originally broadcast through Radio One, Inc.

In September 2010, he hosted the show Family Feud. He is the owner of the website “Delightful” which was launched in September 2014 to help women become more dateable.

Being a comedian, radio personality, and television host he earns a good amount of salary.

There are different controversies regarding Steve Harvey.

While hosting “Miss Universe 2015,” he mistakenly announced the first runner-up, Miss Colombia, Ariadna Gutiérrez, as a winner, and soon after she was crowned, he announced that he read the result incorrectly and the new Miss Universe was Miss Philippines, Pia Wurtzbach.

He apologized for his mistake through social media and immediately in the show too.

In January 2007, he made jokes about Asian men saying, “He didn’t like Asian men and Chinese food too and also Asians are not attractive.”

Steve Harvey stands at a height of 6 feet 1 inch.

He has a body weight of 104 kg. He has dark brown eyes and is bald.