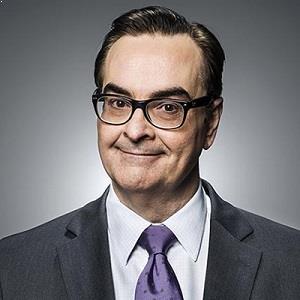 Think about laughing and laugh about thinking.

Steve Higgins is a married man. He is married to Ellen Niedert. The pair has four children from the marriage. Furthermore, the marriage is going strong as there is no news regarding any extramarital affairs at present.

Who is Steve Higgins?

Steve Higgins is an American producer, writer, actor, announcer, and comedian. Currently, he is the announcer of ‘The Tonight Show Starring Jimmy Fallon’. Additionally, he also previously served as a writer and producer of ‘Saturday Night Live’.

Higgins was born in Des Moines, Iowa on August 13, 1963, to parents Marian and Harold Higgins. Additionally, he has brothers David, Alan and Michael and sister Vianne. He became interested in the world of comedy since his childhood years. He is of American nationality. Furthermore, he belongs to a mixed ethnic background of English, French, German, and Italian.

Higgins initially performed in several places in Iowa. Soon, he along with his brothers became popular in the Iowa lounge scene and they later began performing in Los Angeles. In 1989, he performed at The Vic Theatre in Chicago, Illinois. His big break came after he became the co-head writer of ‘Saturday Night Live’ from 1995 to 1997.

Furthermore, Higgins has also worked as a writer for ‘364 Girls a Year’, ‘The Jon Stewart Show’, and ‘Doug’. As a producer, he has more than 25 credits as a producer and over 10 credits as an actor. As an actor, he has appeared in movies and television series including ‘Detroiters’, ‘Ghostbusters’, ‘Popstar: Never Stop Never Stopping’, ‘The Awesomes’, ‘Elf: Buddy’s Musical Christmas’, ‘Crazytown’, ‘Freaks and Geeks’, ‘iCarly’, ‘30 Rock’, and ‘Doug’ among others. Currently, Higgins is the announcer for ‘The Tonight Show Starring Jimmy Fallon’.

Higgins has won three Primetime Emmys to date. Additionally, he has also won the WGA Award. All in all, he has 9 wins and 45 nominations to his name as of now.

Higgins has not revealed his current salary. However, he has an estimated net worth of around $ 2 million at present.

Higgins has not been linked with any notable controversies in his career. At present, there are no rumors concerning his life and career.

Talking about his body measurement, Higgins has a height of 6 feet (1.83 m). Additionally, his hair color is black and eye color is dark brown.

Higgins is active on Twitter. He has over 18k followers and has tweeted more than 1.2k times. However, he is not active on Facebook and Instagram.