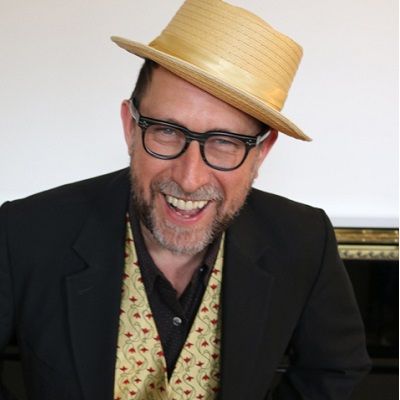 About Steve’s relationship status, he has been married to French psychoanalyst, writer, filmmaker, and film producer Muriel Téodori. They have been living in France for recent years.

Together, the couple released an album named Welcome to the Voice in 2007.

Who is Steve Nieve?

Steve Nieve is an English musician and composer. He is famous for being a band member of hit bands like Elvis Costello the Attractions, the Imposters and Madness.  He was also successful as a prolific session musician, featured on a wide array of other artists’ recordings.

Steve Nieve was born on 21st February 1958, in London, England. His birth name is Stephen John Nason and holds English nationality. Steve’s current age is 61 and his birth sign is Aquarius. His ethnicity is English.

Steve is not so open about his personal life so there is no information about his family.

He attended the Royal College of Music but dropped out in 1977 and joined Costello’s backing band the Attractions. received his musical moniker “Nieve” while on Stiff Record’s first tour.

His career started in 1977 after he dropped out of college to join a band ‘The Attractions’. Steve played the piano, organ and other keyboard instruments on most of Costello’s projects and albums like,’ This Year’s Model’, ‘Imperial Bedroom’ and ‘Blood & Chocolate’.

When Steve was working with the band he even wrote some material on The Attractions’ Costello-less album, Mad About the Wrong Boy under the name Norman Brain, in collaboration with his then-girlfriend, Fay Hart.

But later on, the band began to work less together. So in 1986, Nieve formed the group the Perils of Plastic with ex-Deaf School vocalist Steve Allen, releasing three non-charting singles in the UK in 1986 and 1987, at the same time Steve led the house band which billed as Steve Nieve and The Playboys on the UK TV series The Last Resort with Jonathan Ross.

In 1994’s the Attractions reunited for the album ‘Brutal Youth’ but they weren’t together for too long, they split up in 1996. But Costello/Nieve collaborations never stopped, they toured as a duo, and Nieve even contributed keyboards to all of Costello’s albums since the mid-1990s, including 1998’s Burt Bacharach collaboration ‘Painted From Memory’.

In 2001 Nieve started working with Costello’s new backing band. They dubbed the Imposters, Elvis Costello & the Imposters have toured extensively and released the albums When I Was Cruel, Cruel Smile, The Delivery Man, The River in Reverse with Allen Toussaint and Momofuku.

Steve even released his solo albums,’Keyboard Jungle’ which was his first, it was the combination of classical and ersatz film scores delivered from his beloved Steinway piano. His second solo album was Playboy which was released in 1987, it consisted of solo acoustic piano renditions of rock songs by David Bowie,10cc and the others.

In 2007, he released an album with his wife, Muriel Téodori. The album was named ‘Welcome to the Voice’. It is a bilingual opera that is based on an original story and libretto. In the year 2014, he released ToGetHer.

Although being a versatile musician Steve has won an award to date. Steve was awarded NME Award for the Best Keyboardist in 1983.

Nieve is a good musician as well as a good person. To date, he has not been involved in any scandals or controversies.


Steve Nieve’s primary income source is music. So his estimated net worth is $1 million. However, there is no information about his annual salary.

He is 5 feet 2 inches tall. He has brown colored hair and grey colored eyes. Steve’s shoe size is U.S. 8.

Steve Nieve is not active on any social media.