Steve Rushin is renowned as an American journalist, novelist, and sportswriter.

Steve Rushin is a married man. He is married to Rebecca Lobo who is a former basketball player and currently works as a reporter and color analyst for ESPN.

The pair met for the first time when she confronted him in a bar over a mocking column he wrote about the WNBA.

The couple exchanges the knot on the 12th of April in 2003, in Springfield, Massachusetts. As of now, the pair have been married for 18 years and still, they have a strong bond.

Currently, he is having happy conjugal life with his wife and children and resides in Southwick, Massachusetts. 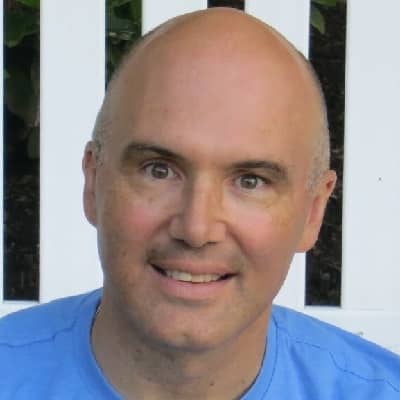 Who is Steve Rushin?

Steve Rushin is renowned as an American journalist, novelist, and sportswriter. As of New York Times, he has been called ‘the ultimate tinkerer with language’.

Also, he is best known as the husband of WNBA star-turned-analyst Rebecca Lobo.

The journalist was born on the date of 22nd September 1966. The birthplace of Steve is Elmhurst, Illinois, the U.S. however, he grew up in Bloomington, Minnesota. As of 2021, he is 54 years old. His nationality is an American and is of

He is the son of Jack Rushin and Jane Rushin. His father had a saloon on Market Street in San Francisco whereas his mother was a teacher. Talking about Steve’s maternal ancestry, they consist of a long line of big-league baseball players, firefighters, and bar owners.

His grandfather Jimmy Boyle played catcher for the 1926 New York Giants and his great-uncle, Buzz Boyle was a professional baseball player who played as an outfielder in Major League Baseball from 1929 to 1935.

Steve is the third kid of his parents among five children. His older brother named Jim was a forward on the Providence hockey team. His other siblings are Amy, John, and others details are unknown at the moment.

Steve attended the John F. Kennedy Senior High School in Bloomington. Later, he studied at the Marquette Univerity in Milwaukee.

Steve began his career as a copywriter for breakfast cereal boxes at Kellogg’s and General Mills as well as the New York sportswriter Oscar Madison. Then later wrote an anthology of sports nicknames.

In 1988, he joined the staff of S.I and within three years he became the youngest senior writer on the S.I staff at the age of 25. His essay, ‘How We Got Here‘ which spanned 24 pages remains the longest-ever article published in a single issue of S.I. at the magazine.

The article filed stories from Java, Greenland, the India-Pakistan border and also covered events like the World Series, the World Cup, and Wimbledon. Then, he left S.I. in February 2007 however, he later returned in July 2010 and resumed his column- renamed ‘Rushin Lit’ – on an occasional basis in October 2011.

Similarly, he contributes to the Golf Digest and Time Magazine for which he wrote back-page essays. Rushin has written numerous essays for The New York Times along with Franz Lidz. Three of their essay have appeared under the title Piscopo Agonistes in the 2000 collection Mirth of a Nation: The Best Contemporary Humor.

Moreover, some of his notable books are enlisted below,

Similarly, his first book, Road Swing was named one of the Best Books of the Year by Publisher’s Weekly and one of the Top 100 Sports Books of All Time by Sports Illustrated.

To date, there are no rumors and disputes available regarding his personal and professional life. It seems that he has managed to maintain his clean profile as of now.

As per other online sources, Steve has an estimated net worth in the range of $1 million-$ 5 million throughout his successful career. Moreover, his other income, salary, and real estate are still under review.

The journalist stands at the height of 6 feet 5 inches tall whereas he has average weight but the exact figure of weight is not available. Further, he has brown pair of eyes color and his other body measurement hasn’t yet disclosed.