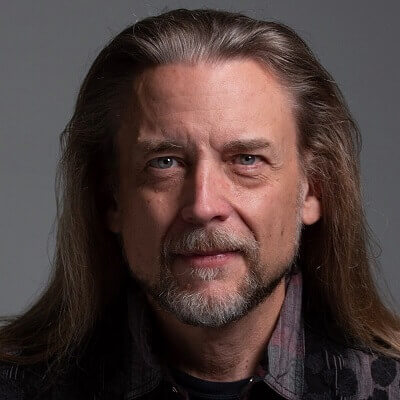 The thing that got me closest to doing Kermit was remembering what Jim did when he was doing Kermit. When he would do Kermit, there were certain faces that he made. There was a certain way he stood, a certain kind of body language that he had

Henson had never spoken to me about Kermit, but he had spoken to Frank Oz about the idea of me doing the character if he became too busy. I felt flattered.

Steve Whitmire is a married man. He is married to Melissa Whitmire. She is a producer and actress famous for ‘The Muppets Take Manhattan’, ‘CAVE iN’, and ‘Kermit’s Swamp Years’.

The couple exchanged wedding vows in June 1978. They have now been married for over 41 years. However, they don’t have any children of their own so far.

Who is Steve Whitmire?

Steve Whitmire is an American puppeteer. He is best known for his performance in ‘The Muppets’ and ‘Sesame Street’.

Steve Whitmire was born as Steven Lawrence Whitmire on September 24, 1959, in Atlanta, Georgia, USA. As of 2020, his age is 60. There is very little information about his family background. He has not revealed anything about his parents and siblings.

He spent his childhood days in Atlanta, Georgia. Whitmire was interested in puppetry in his childhood. His main inspiration is the legendary Jim Henson whose footsteps he later followed in his career.

“I wrote a letter to Jim Henson at the time, and he wrote back. It’s an amazing thing for a ten-year-old to get a letter back from a TV star.”

Talking about his educational background, he went to a local high school and graduated from there. However, he has not revealed which school he went to.

Steve Whitmire first garnered attention while performing with his puppet, Otis as part of an unpaid gig at Six Flags Over Georgia and later at a local Atlanta TV station.

Whitmire was the second performer of Muppets, Kermit the Frog, and Ernie after the death of the original performer and his own inspiration, Jim Henson in 1990.

Brain Henson and Jane Henson personally asked him to be Kermit’s performer a few weeks after Henson’s death. Heather Henson arranged for a Kermit puppet in his house but he hid it before deciding on taking on the role. Later, he also took over the roles of Statler and Beaker, too.

Muppet characters original to Steve include Rizzo the Rat, Lips, Foo-Foo, Wembley Fraggle, Sprocket the Dog on Fraggle Rock, and Bean Bunny in The Tale of the Bunny Picnic (1986).

In 2011, he also performed Link in the movie, The Muppet which was the first speaking appearance of the character since the death of the original performer, Jim Henson. In 2008, he took over The Muppet Newsman.

Whitmire stands tall with a height of 6 feet 4 inches and weighs 72kg. His hair color is blonde and his eyes are green in color.

Steve Whitmire has an estimated net worth of around $10 million as of 2021. He reportedly has an annual salary of around $2 million.

In July 2017, The Muppets Studio announced that Whitmire was no longer involved with them.

The Henson family stated that he made “outrageous demands and often played brinkmanship”. Whitmire later alleged that Disney offered him consolation prizes if he voluntarily left. The case received a lot of attention and was very controversial. He has expressed interest in continuing the role in the future.

You may also like to read more about the Bio, Career, Net Worth, Relationships, Social Media, and more about Janeen Damian, Susan Wheeler Duff, Sunrise Coigney, and more.

‘I am devastated…’-Steve Whitmire’s emotional outpour on being sacked from Muppets!