Steve Zahn is married to Robyn Peterman, an author and theatre artist.

The couple tied the knot in the year 1994. They have been together for almost 24years.

Together, the couple is blessed with two children, Henry born in 2000, and Audrey born in 2002.

They are happily married and are leading a happy conjugal life. 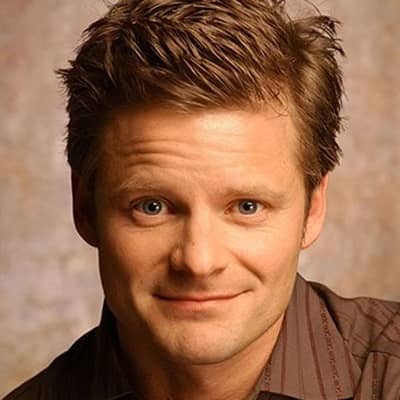 Who is Steve Zahn?

Steve Zahn is an actor and comedian from the United States.

He is a comedian and actor who has appeared in films such as “Reality Bites,” “Shattered Glass,” “Rescue Dawn,” and the “Diary of a Wimpy Kid” series.

Steve Zahn was born on November 13, 1967, in Marshall, MN. As of now, he is 54 years old. Talking about his nationality, he holds an American identity.

Zahn spent most of his childhood in Mankato, Minnesota, where he attended Kennedy Elementary School, before moving to the Minneapolis suburbs for high school, where he participated in school plays and won two Minnesota state speech championships.

In 1986, he graduated from Robbinsdale Cooper High School with the intention of joining the United States Marine Corps. Zahn went on to Harvard University’s Institute for Advanced Theater Training, where he earned a Master of Fine Arts.

Steve Zahn is an American actor and comedian. Saving Silverman, Diary of a Wimpy Kid, Dr. Dolittle 2, and Daddy Day Care are among his film credits.

After publicly claiming to be a member of Actors’ Equity, Zahn made his professional theatrical debut in a Minnesota production of Neil Simon’s Biloxi Blues in 1991. Zahn’s fellow actors encouraged him to pursue acting, and he enrolled in the American Repertory Theater’s two-year training program. He collaborated with renowned stage director Andrei Serban at A.R.T.

Steve’s first starring part was in the critically praised indie film Happy, Texas, for which he received a Special Jury Award at the Sundance Film Festival in 1999.

Zahn has also appeared on television on a regular basis, portraying Davis McClary in HBO’s Treme for 36 episodes. He portrayed Bad Ape in War for the Planet of the Apes in 2017.

Being a successful actor and comedian, Steve has garnered a good fortune and led a luxurious and comfortable living.

As per the sources, Steve Zahn has an estimated net worth of $ 20 million. However, his exact salary, income, and earnings aren’t disclosed yet.

Owing to his professional career, Steve has not been involved in any kind of controversy or scandal. He has successfully kept himself away from the unwanted rumors as he doesn’t mix his professional and personal life together.

Steve Zahn has a height of 5 feet and 7inches and weighs around 75kgs.

Moreover, he has a pair of beautiful blue eyes Light brown hair color, and a fair skin complexion.

Steve has a verified Instagram account where he has gained over 89.8k followers under the username @stevezahn.