Steven Curtis Chapman is a Five-time GRAMMY winning singer. Steven is married and the father of of six. 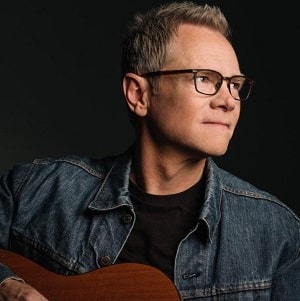 “I would hate to be a new artist or writer in town today. But somehow the cream continues to rise. If there's one who's great, he just jumps out of the pack like you can't believe.”

Steven Curtis Chapman has been married to Mary Beth Chapman. They met for the very first time in the early 1980s at Anderson University in Anderson, Indiana. They got married in the fall of 1984.

They adopted them after going on a mission trip to Haiti in 1997 at the request of their daughter. Initially, they refused to adopt but later, they were convinced.

Who is Steven Curtis Chapman?

He is the five times Grammy Awards and 58 Gospel Music Association Dove Awards winner, more than any other artist in history.

He was born on November 21, 1962, in Paducah, Kentucky. He has a birth sign Scorpio. His father’s name is Herb Chapman and his mother’s name is Judy Chapman.

His father was a guitar teacher. He grew up singing and playing the guitar. He holds American citizenship but his ethnicity is Caucasian.

He attended as a pre-med student at Georgetown College in Kentucky. Steven transferred to Anderson College in Indiana after a couple of semesters.

He dropped out and made his way towards Nashville to make his career in music and then he attended Belmont University in Nashville.

During his stay at Nashville, he began working in a music show at Opryland USA. He came with a song ‘built to Last’ in the 1980s and that song was recorded by prominent gospel group The Imperials. Then, he signed with Sparrow Records, where he rose to prominence.

Steven released his debut album, ‘First hand’ in 1987. His song ‘Weak Days’ of that album peaked No.2 on the Contemporary Christian Music Chart. He brought his second album ‘Real Life conversations’ and his song, ‘His Eyes’ became No. 1.

He announced his departure from Sparrow records in August 2012 and signed to Sony’s Provident Label Group. He released the album ‘joy’ on October 16, 2012. Reunion Records released his album ‘The Glorious Unfolding’ which was his first studio album.

Steven hosted ‘Sam’s Place: Music for the Spirit’ which was a concert series at the Ryman Auditorium in Nashville from the beginning in September 2014 to April 2015. He released ‘Warrior’ as the official song for the soundtrack to ‘War Room’ in 2015.

He was awarded GMA Award in the category Best Songwriter of the year in 1989. For his song ‘His Eyes’, he got Contemporary Recorded Song of the Year award in 1989 from the Gospel Music Association. He was also given his first Grammy in the Best Pop Gospel Album category.

It is estimated that he has a net worth of $25 million and his main source of income is from his professional life.

He is secret about his personal matter. He has not been engaged in any rumor in his personal life as well as in private life.

He has a height of 5 ft. 8 inches. He has got dark brown hair and light brown eyes. Other information regarding his weight, dress size, shoe size is not available.