Steven Mnuchin is a senior American politician, investment banker, and film producer. He is serving as the 77th United States Secretary of the Treasury as part of the Cabinet of Donald Trump.

Steven Mnuchin was married to Kathryn Leigh McCarver from 1992 to 1999. In 1999, Mnuchin married Heather deForest Crosby, which was reported as a second marriage, and they had three children together (Emma Mnuchin, Dylan Mnuchin, and John Mnuchin).

They divorced in 2014. On June 24, 2017, he married actress, Louise Linton. He and his third wife are together since their marriage but they don’t have any children. 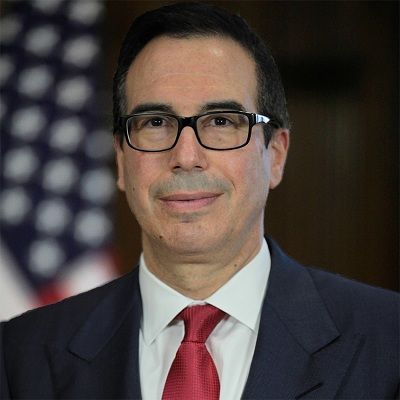 The NFL has all different types of rules. You can't have stickers on your helmets. You have to have your jerseys tucked in

on NFL players kneeling during the national anthem]It's not about free speech. They can do free speech on their own time. That this is about respect for the military, and the first responders, and the country

I think what the president is saying is that the owner should have a rule that the players should have to stand and have respect for the national anthem.

Who is Steven Mnuchin?

Steven Mnuchin is an American political activist and investment banker. He is serving as the 77th United States secretary of the treasury as part of the Cabinet of Donald Trump.

Once, he had been a hedge fund manager.

He was born on December 21, 1962, in New York City, New York, the U.S, and grew up along with his sibling, Alan Mnuchin who was a vice president at Goldman Sachs in 1995.

His father’s name is Robert E. Mnuchin who is an American art dealer and former banker.

Moreover, his mother is Elaine Terner Cooper who early died in 2005. Mnuchin is the second youngest son in his family. He belongs to American nationality. His ancestry is not available.

In New York City, he attended Riverdale Country School. He graduated from Yale University with a bachelor’s degree in 1985. At Yale, Mnuchin was the publisher of the Yale Daily News and was also initiated into Skull and Bones in 1985.

In the early 1980s, Mnuchin’s first job was as a trainee at investment bank Salomon Brothers, while still studying at Yale. When Mnuchin studied at Yale University he lived in the former Taft Hotel in New Haven.

There he Connecticut together with businessman Edward Lampert and lawyer Salem Chalabi as roommates.

After he graduated from Yale in 1985, he started working for Goldman Sachs, where his father is still working since 1957. He became a partner of Goldman in 1994. Until he left the company in 2002, he held different positions as a partner.

He received in the months prior to his departure after 17 years of employment, an estimated $46 million of company stock and $12.6 million in compensation.

Mnuchin briefly worked as vice-chairman of hedge fund ESL Investments, which is owned by his Yale roommate Edward Lampert, after he left Goldman Sachs in 2002. He established the company SFM Capital Management together with financier George Soros in the following year.

Mnuchin has been blamed for his use of offshore entities for investment purposes as a hedge-fund manager, which is a common practice in the industry.

A group led by Mnuchin bought California-based residential lender IndyMac, which had been in receivership by the FDIC and owned $23.5 billion in commercial loans, mortgages, and mortgage-backed securities in 2009.

Mnuchin sold OneWest to CIT Group for $3.4 billion in 2015. In November 2016, after OneWest was sold to CIT, the California Reinvestment Coalition submitted a Freedom of Information Act request to the United States Department of Housing and Urban Development (HUD).

From this, it helps them to learn more about CIT’s reverse mortgage subsidiary, Financial Freedom

He founded Dune Entertainment as a side business, which was the financier of a number of notable films, mostly for 20th Century Fox, including the X-Men film franchise and Avatar in 2004.

Moreover, it resulted in RatPac-Dune Entertainment, which then struck a financing deal with Warner Bros in 2012. Between 2013 and 2018, RatPac-Dune financed many films for Warner Bros., including American Sniper and Mad Max: Fury Road.

Donald Trump announced on his website that he would nominate Mnuchin as the U.S. secretary of the treasury on November 30, 2016.

Mnuchin earns a handsome amount of money. He is one of the most successful and richest politicians in America.

Furthermore, he has also established himself as financially successful and his current net worth is around $400 million.

He is wrapped up in a growing controversy over his use of a government plane to travel to Fort Knox. During the last month’s solar eclipse and his request to use one for his European honeymoon this summer.

Steven Mnuchin has a height of 6 ft and his weight is unknown. His hair color is black and his eyes are brown in color. Furthermore, his other body measurements are not available.