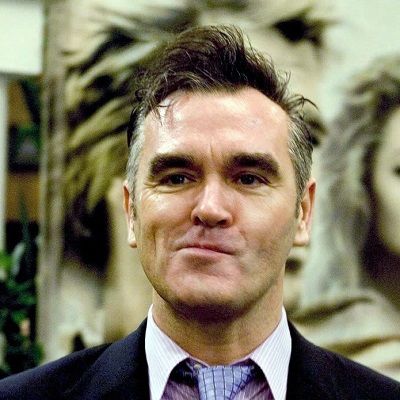 I do think it's possible to go through life and never fall in love, or find someone who loves you

You have to, at least from a distance, look as if you know what you're doing, and I can manage that.

He had once mentioned in an interview that he is not homosexual but he is humasexual, which means attraction towards human beings.

Back in 2006, he was also in a relationship with an Italian man, Gelato.

Previously, Morrissey had an affair with Tina Dehghani in 1999 and they also have a child together.

Who is Steven Patrick Morrissey?

Steven Patrick Morrissey is an English singer, songwriter, and author. He used to be a lyricist and vocalist for a popular rock band The Smiths from 1982 to 1987.

In 2018, Steven released a cover of Back on the Chain Gang from The Pretenders band. Recently, in 2019 he has performed in the Lunt-Fontanne Theatre on Broadway.

Steven Patrick Morrissey was born on 22 May 1959 in Davyhulme, Lancashire, England. He is the son of Elizabeth Ann (Dwyer) and Peter Morrissey who were working-class Irish Catholics.

His parents emigrated to Manchester from Crumlin, Dublin.

He studied in St. Wilfred’s Primary School, Morrissey but flunked his 11-plus exam. Then he joined St. Mary’s Technical Modern School. He was excellent in athletics.

Steven left studies and had worked as a clerk for the civil service and Inland Revenue, a salesperson in a record store, and as a hospital porter.

Then in 1977, Morrissey became the vocalist for a band the Nosebleeds. He co-wrote a number of songs with the band such as “Peppermint Heaven”, “I Get Nervous” and “I Think I’m Ready for the Electric Chair.”

Then he decided to make a career in music journalism. So in 1981, Babylon Books company released a 24-page booklet written by Steven. He also wrote a book about the late American film star James Dean which was titled as James Dean is Not Dead.

The Smiths is an English rock band which was formed in Manchester in 1982. The other members of this band were guitarist Johnny Marr, bassist Andy Rourke, and drummer Mike Joyce.

Steven was a vocalist and they had released non-album singles: “Heaven Knows I’m Miserable Now” (their first UK top-ten hit) and “William, It Was Really Nothing” (1984), The Queen Is Dead (1986), and more.

Their last album was Strangeways, Here We Come, which was released in Sep 1987. Unfortunately, in the same year, the band collapsed due to internal tensions.

After the dissolution of the band, Steven started to work on his album Viva Hate and has released singles like Suedehead, Everyday Is Like Sunday and Margaret on the Guillotine. His other solo projects were Very Best of Morrissey (2011), World Peace Is None of Your Business (2014), Low in High School (2017), California Son (2019), and more.

He has also published his first novel, List of the Lost in 2015.

The estimated net worth of this singer and author is $50 million. Around 3000 and 35000 copies of his 24-page booklet and autobiography were sold respectively.

He has light hair and blue eyes. He is 5 feet 11 inches tall and weighs around 67 kg.

Also, read the career, salary, the net worth, controversy, and the bio of actor Clint Eastwood, Daniel Craig, Hector Elizondo.